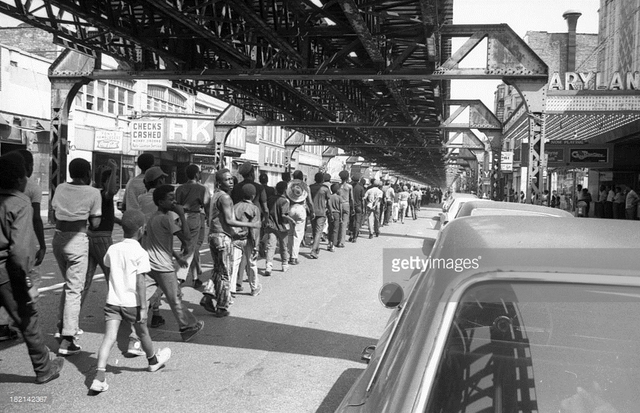 The Maryland Theatre opened in 1928 on the site of the Woodlawn Theatre in the heart of the Woodlawn neighborhood’s E. 63rd Street business and entertainment corridor, standing between S. Drexel Avenue and S. Maryland Avenue. The Maryland Theatre was within blocks of both the palatial Tivoli Theatre and the Trianon Ballroom (sister to the Aragon Ballroom in Uptown), as well as a handful of smaller theatres.

The Maryland Theatre, which originally seated 1,800, was operated by Balaban & Katz from its opening until the 1960’s, when it became part of the ABC Theatres chain. In the 1970’s it hosted African-American performing artists.

The theatre was closed in 1977, and was virtually destroyed by vandals in the 1980’s which led to its demolition in the 1990’s. The site is now a parking lot.

Hi chicagomovieman- I will get a copy of “MONKEY HUSTLE” ; the views of east 63rd street will be worth it. I was never in the Maryland- but remember seeing it from the ‘L’ train on my way to 63rd- Stony. After visiting the Museum of Science and Industry, in the 60s, we would walk back to the CTA and, instead of boarding at Stony Island,walk west on 63rd. I had to get a close up view of the theatres I had passed from above. My most vivid memory is of the Lex, a small theatre about two blocks east of the Maryland. You’re so right, the area was bustling! Many people on the street; lines at the boxoffice windows (at least on Saturday/Sunday afternoons).Never had the time to venture inside; I regret it now. Since I was born and raised on the north side of Chicago, my knowledge of south side theatres is very limited. Never been to the Rhodes or Hamilton.

If anyone can find any pix of the Maryland—-please help …I was hoping to see something if possible…..thanks in advance for any help provided
:)

“… .In a late rush, B&K’s State Lake, Maryland and now Uptown are sold out for tonight’s Liston-Clay theater TV episode. The Marbro has seats … .”

The web site has email and phone contacts. I know for a fact that they have some photos of this building & they would be happy to sell you copies at a very reasonable price.

Hey,
Are these these the photos that you shot in the late 80’s ?
If so, please post them here on the site, or provide a link.
Its kinda difficult to buy photos sight unseen. Please post!

Yes, they do have my photos. But they also have others. I no longer have copies myself. When I was taking photos there were no digital cameras. I got sick of storing Kodak slides as I got older and gave everything to THS. I also figured the collection did more good there than in my basement.

Seriously, give them a call. The prints don’t cost much, and if you can’t make it to the archive they will send you copies for examination with a watermark before you buy.

Thanks….i had no luck searching the archive woth my lack of skills
I’ll keep trying….where there’s a will………..

As noted above, you can see the Maryland Theatre in the movie “MONKEY HUSTLE”. 39 minutes and 38 seconds into the film, the box office, the glass entrance doors,a number of poster cases(J.D.’S REVENGE is on display), and many light bulbs under the marquee can be seen in a great night scene. See it for free at the Internet Movie Database or Hulu.

I just posted above some photos I took around 1980

A book about the Jackson Park Theater antitrust case lists the Maryland as opened in 1918 and acquired by B&K in 1928, showing films 9 weeks after the first-run in the Loop.