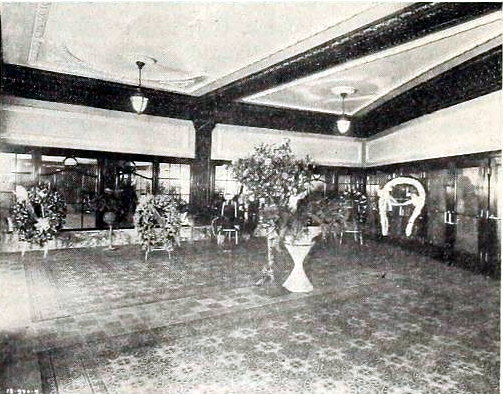 The Comus Theatre was opened in 1894. It reopened on April 26, 1918 as the Woodlawn Theatre with a seating capacity given as 2,000, which was overstated. It was a medium-sized theatre in the Chicago neighborhood of the same name, on E. 63rd Street at S. Drexel Avenue. It could seat just under 1,300. The theatre was designed by Henry L. Newhouse.

The Woodlawn Theatre closed in 1926 and was demolished. The Maryland Theatre was built on the site, opening in 1928 by Balaban & Katz. (It has its own page on Cinema Treasures)

Departing from tradition, the lavish new Woodlawn theater at 63rd St. and Kenwood Ave., will include a “daylight picture effect” among its many up-to-date innovations when it opens Saturday. This announcement, was made recently by George N. Gollos, who with his brother Harold M. Gollos, manages and owns the string of South side theaters which consist of the Ray, Midway and the latest $100,000 Woodlawn theater. “As far as I know,” Mr.Gollos states, “we are the originators of this idea in Chicago. We began to brighten up our theaters when we considered the many advantages that a lighter room brings.”

In pointing out the advantages Mr. Gollos enumerated first the elimination of eye strain â€" no flicker or contrast between a dark room and a bright screen â€" and, second, the important factor of convenience. “The beauty of the decoration in the theater may be seen also,” Mr. Gollos asserted. “It will be so light in the building that a newspaper may almost be read. The latest and most superior scientific improvements will convey a pleasant and beautiful glow of brightness. This, with the newest and best projection and screen equipment, will make the Woodlawn theater the finest in the city.”

Some 30 years ago the “gay white way” of moviedom on the far South side was 55th St., with its three three-reel theaters. Authority for this statement is George N. Gollos, who, with his brother, Harold, will open the new luxurious $100,000 Woodlawn theater. 63rd St. and Kenwood Ave., Saturday morning at 10:30 o'clock. Among the first “reel” pioneers in the community, the Gollos brothers owned and operated a “nickel show” called the Jefferson theater on 55th St. and Harper Ave. at the birth of the then-struggling industry. Three decades ago there were no movie houses on 63rd St. A “western” and an exciting slapstick comedy usually comprised the evening program at the infant shows, and the piano player improvised between the features. A few years later the organ took the place of straight piano music. More than $100.000, the amount spent on the new Woodlawn theater, would have been considered a sum beyond comprehension in this early period of movie history. During that time, however, eight-reel talking features would not have been dreamed of either.

There are two theaters represented here. The one in ken mc’s comment was the Woodlawn at 1326-28 E 63rd, a former bank building. Also next to that was yet another Woodlawn, this a nickelodeon at 1324 E 63rd. I believe the seating count belongs to the one at 1326-28 and this was around 632 as shown on the Sanborn maps.

An interesting story: this theater’s property was originally owned by mayor “Big Bill” Thompson and some controversy was raised when a city alley had to be vacated to accommodate the theater. The owner was Andrew Karzas, who also operated the Trianon and later Aragon as well as the North Center Theater.

On April 29, 1918, amid some labor problems, a bomb went off in front of this theater, destroying the ticket seller’s cage, theater front and the lobby. It also put a good-sized hole in the sidewalk.

So, it would seem that the early theater at this address was replaced or renovated, correct? The trade magazine referenced above gives the impression that it was to be replaced.

Maps of the late ‘20s and early ‘30s only show one theater, the Drexel, at 858 E.63rd, with a small jewelry shop occupying 854 E., a storefront in the building that houses the theater. However, in the 1916 University of Chicago commencement program there’s an ad for the Drexel Popcorn Shop at 856 E. ('The Best Popcorn You Ever Ate – Next To The Drexel) which was still at that address twenty years later.

Rivest266 – looking at the ad you posted, I’m wondering if that’s the ad for the opening of the Maryland Theater across the street. The address on the ad is the same as that theater. Is there a chance the ‘Woodlawn’ title is actually referring to the neighborhood and not the theater?

I don’t see any relationship to a “Comus” theater; I don’t know what that’s about. The Woodlawn is pretty overlooked - descriptions from its opening rank it among the most elaborate motion picture theaters in the city when it opened. But it was independent, not part of a chain like Ascher Brothers, Lubliner & Trinz, or Alfred Hamburger. It appears to have been an enter-at-screen configuration.