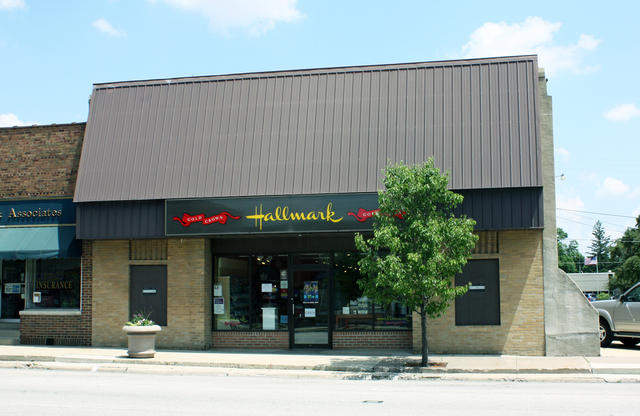 The Woodford Theatre opened on April 2, 1938 with Ronald Reagan in “Sergeant Murphy”. It closed as a movie house in 1983 and today houses a greeting cards store.

The Woodford was an art deco house which opened in 1937. It closed in 1957 while I was a student at Eureka College. A community group decided to open it as a non-profit and sold memberships. A college group I belonged to bought a membership and I was asked to represent them on the board. We did a pretty good job of saving it, as it survived 26 years under the community aegis. It’s interesting that I remember in those early years of non-profit operation the only films we could be sure of at least breaking even on in that college town were Disneys!

Actually, The Woodford Theatre Opened On April 2, 1938 With Ronald Reagan In “Sergeant Murphy” Along With An “Our Gang”, Unknown Cartoon, And Comedy; Followed By George Brent In “Gold Is Where You Find It” A Day Later With A Cartoon And Other Selected Subjects. Prior To It, There Is No Theater In Eureka Besides The Jewel Theatre Which Closed By 1930.

The Theater You Mentioned About Back In 1957 When ABone Was In Eureka College Was Actually When The Woodford Theatre Was Either Closed For New Equipment Or Their Schedule Being Scrambled, But The Theater Continued To Operate At The Time. Yes It Closed In Early 1983 And The Building Was Sold Later That November.