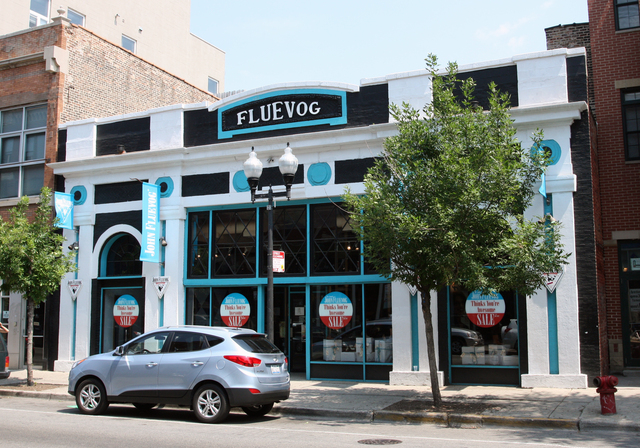 The Home Theater opened in 1912 for the Gumbiner Brothers circuit. In 1914 it was re-named Bell Theater.

AKA time again: this theatre on Milwaukee Ave was perhaps more commonly called the WICKER PARK (after its' neighborhood). The name BELL usually applied to the one recently identified @ 3064 W. Armitage Ave (of all this I am sure). Somebody else out there must also remember this.

Yes! My (own) Dad does. He grew up in the Bucktown neighborhood, and besides the WEBSTER nearby, he says if he walked south on Milwaukee Ave you got first to the BANNER (right at North/Damen Ave), then this one the WICKER PARK (a few doors past North), then shortly thereafter the ROYAL (running the longest), and before one reached Division St. the PAULINA. All these would be to your left, or East side of street, as you continued down Milwaukee Ave. And at Division/Milwaukee you finished with the CROWN and CHOPIN (which actually still remains in some form for live theatre). So there.

More specifically, this is the blue Fluevog store.

Yes indeed – that ‘Fluevog’ store building has every (outward) appearance of once having been a vintage theatre of small-to-medium size, and kept-up nicely too; almost enough of an enticement for me to actually shop there. They probably don’t realize how lucky they are. The street address is just a door or 2 south of the famous ‘Flat Iron Bldg’ there.

The interior is quite well-preserved as well

This theatre would have been pretty close to the elevated tracks. Is it possible it shared some of the space that the Double Door is in?
Or was the Wicker Theatre in it’s own building a tad further South on Milwaukee?

The Double Door was previously a large tavern called Main Street that was kind of bi-level. Until about 1991 or so.
It had giant “L” shaped pool tables with carved legs. And a small stage towards the Damen entrance side. Not sure if Double Door has multiple entrances on boh Milwaukee & Damen as Main Street did.

You’re on the wrong side of the street David Z., cross Milwaukee Ave to the East side. You can tell automatically by the odd-numbered address that’s the right side for the Wicker Park Theatre, the Double Door being on the even-numbered west side of Milwaukee.

in a half doz. or so previous posts i described a stroll south on milwaukee ave circa ‘30s-'40s my late father took to see what’s playing at shows in the 'hood

now walk the other way, back in time headed north on milwaukee ave
starting w/ the OAK theatre at armitage/western, another 2 blks the CONGRESS which’s the biggest, continuing on milwaukee on our left’s the RIO (aka MARS) just before the Logan Square monument and ‘L’ terminal. Passing that in short order first the LOGAN then the HARDING also on the left. So far that’s 2 miles out on milwaukee ave which i think’s as far as dad normally ventured, finishing with
the DALE and little NITA across the street from one-another

what an abundant selection he had. today only the LOGAN can one count on, the CONGRESS still stands but for the occasional rock show (not sure part of the NITA bldg’s extant)

Sometime in the mid 60’s I recall shopping in the area with my parents. After a bit of nagging, they reluctrantly made a special stop for me so I could go in and look around.

At that time it was some type resale store – possibly Goodwill. It still had the high ceilings (but hanging florescent lights had been installed).

The room was designed so the walls narrowed and you could easily make out where the screen would have been (the building was not a box).

I do recall when you entered the building, you walked on a tile floor initially. The lobby wall was removed so the building was one big space. As you continued into the former auditorium, the floor soon became wood. My guess is the incline was still there and the wood floor was a quick way to level the area for retail use.

The Home Theatre was designed by architect David Saul Klafter. On December 9, 1912, not long after the house had opened, the roof of the building collapsed. A lawsuit was filed against Klafter, but he was cleared by the Illinois board of examiners for architects, as noted in this article in the January 10, 1914, issue of The Moving Picture World.