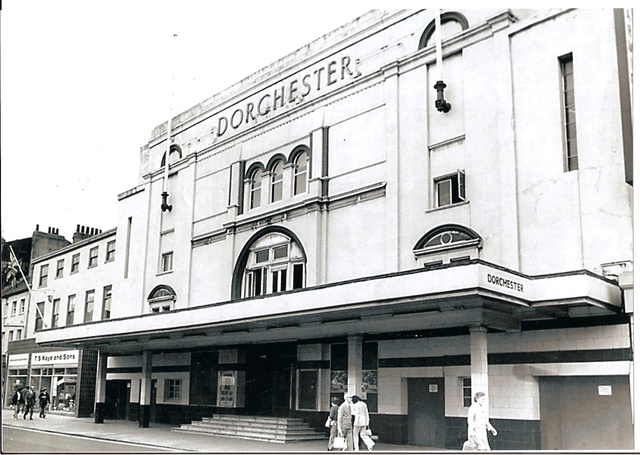 Opened as the Grand Opera House on January 9th, 1893. It was designed by noted theatre architect Frank Matcham and was used for drama, despite its name. It had seating for 1,200 and had a 50 feet deep stage.

It was closed on 30th May 1930 and was remodeled to open on 1st September 1930 as the Grand Theatre Cinema. Films were now shown instead of stage plays.

The change was successful so in July 1935 the theatre was closed for three months for extensive renovations by architects Blackmore & Sykes. The old three-tier theatre was replaced by a 1,507 seat cinema with a large, single balcony, a peach, gold and silver color scheme, a 3Manual/9Ranks Binns, Witton & Haley organ played by Stanley Johnson, and a new stage with elaborate lighting. The proscenium was 35 feet wide, which contained a gold festoon (drop curtain) and large draw curtains. The front of the old theatre was also modernized but much of the original facade could still be identified. The Dorchester Cinema opened on 30th December 1935 with Will Hay in “Boys Will Be Boys”. Now operated by Associated Hull Cinemas Ltd., it was described in one report as “a place of great beauty and comfort”.

The Dorchester Cinema showed first run movies for many years and later was also home to many long run epics such as “South Pacific” and “Ben-Hur”.

It was closed in 1977 because of declining audiences but was re-opened occasionally after that for special screenings including 70mm and concerts. The Dorchester Cinema was closed forever in 1979 and demolished in 1987.

The site is now occupied by a bar and store complex.

Just for the record…..
the history and information I used to create this page on the Dorchester came from my own knowledge, the book “Last Complete Performance-in memory of Hull’s cinemas” by Robert Curry at the Local History Unit at Hull College and the Interludes Hotel posters website in Scarborough.
Chris Ketchum at the Hull College Local History Unit kindly supplied me with interior and exterior photos of the Dorchester which were taken before it was demolished.

just for the record

Some of the information regarding The Dorchester, supplied by MJC is incorrect.

The Dorchester seated 1806.
I have the only surviving photo of the Grand Theatre Cinema taken a week after it closed and men with handcarts are seen taking away the tables and chairs from the circle cafe. This photo also shows fly posters for the last film, “Africa Speaks” 1935. It is not widely known, that because of the Grands deep stage (50 feet), that it was back projection. It only became front projection with the advent of the Dorchester and the demolition of the Gods!
I also have some of the last surviving prints of pen & ink drawings of the grand opera house, as it was first known. I will submit these items to the site once it is able to accept them.

The seating capacity was increased in 1935 when the theatre was remodelled (it would have seated around 1,200 by present day standards before alteration) because much of the stage area was included in the the redesigned cinema. The figure of 1,509 for the Dorchester is taken from the 1943 Kinematograph Year Book. This also gives the proscenium width as 35 feet.

The seating capacity at the Dorchester came from Robert Curry’s book.
Its been almost 45 years since I was in the Dorchester so I could not remember how many people it would hold.
However when I first saw it listed at 1507, I thought that figure was a bit low. I would have estimated it at around 17 hundred based on my failing memory.
I am quite happy to go with David’s figure of 1806. I remember him when he worked there and he was a fountain of information about the place.

Here are some links for pictures of the Dorchester:

Thanks to David Alexander for supplying them. They are used with his permission.

I have given a brief biography of Brinley Evans who was managing director of Hull Cinemas Limited and his empire of cinema’s he acquired and controlled. This can be seen on the web site of the Dorchester Hull. All the information I have supplied was from Mr Evans himself and my own personal recollections and experience. I worked as second projectionist at the Criterion, National, Carlton and the Dorchester. I was the only projectionist at the Cleveland for the last 18 months of it’s life and became co-chief at the Dorchester and later Chief at the Carlton. I remained at the Carlton for several months after it had turned to bingo. I also gave a helping hand at the Cecil when it opened. I really enjoyed working the Dorchester most. I reluctantly took the offer of Chief at the Carlton when Mr. Evans promised to pay me the same rate as I had been getting as co-chief and as I only lived in Alliance Avenue just around the corner from the Carlton, the offer had been too tempting. I didn’t work with David Alexander during his time at the Dorchester. We met during my spell at the Criterion abnd remained good friends ever since. I too have some great photos of the Dorchester and quite a bit of Cine film of it as well as the Carlton.
Barrie Wilson (A.K.A.) Steve King

The ‘extensive renovations’ which were carried out in July 1935 were to the design of architectural firm Blackmore & Sykes.

Thanks Ken.
In Robert Curry’s book there are pictures of the blueprints from Blackmore and Sykes showing the main floor and balcony plans.
What is amazing is that the complete interior and exterior renovations were done in just three months, including lowering the roof, building the new balcony and projection room which was high over the rear of the balcony and rebuilding the lobby and outside facade.In effect they built a whole new theatre in that short amount of time.
I moved to Canada with my parents in 1961 at the age of 16 but my memories of visiting the Dorchester and its projection room remain. Their presentation of movies was excellent and as good as any I have ever seen. When I visited, David Alexander was the “whiz kid” on the projection staff for his technical abilities as well as his showmanship.

steveking, remember me?! When you were at the Dorchester, you very kindly showed me around that lovely cinema and I vividly remember the two of us rising on the organ stool from the pit to stage level in the impressive auditorium. The gold satin festoon curtain and plain satin front curtains, together with the red/amber/blue stage lighting created an unforgettable spectacle. At the time of my visit, I believe “Mary Poppins” was enjoying a very healthy run there. It was two years before I joined the industry at the Odeon, York and I had never previously been inside a cinema while it was closed to the public or been shown over a projection suite and had so much explained. You also showed me the Carlton and I enjoyed lunch with you and your wife (no doubt bombarding you with questions). It was one of those occasions one never forgets and you were my first “cinema contact”! My only regret is never having had the opportunity to see a film at the Dorchester. I now have a home cinema with variable masking, screen and house tabs, three-colour circuit pageant lighting, LED concealed lighting and projected clock. All inspired by places like the Dorchester and the Odeon, Leicester Square. So, thank you again and, if you’d like to give me the opportunity of returning the favour, albeit on a much more modest scale!, by showing you my little Odeon, I’m on Flickr as “Fanatical about Odeon”. I’m guessing we have a fair bit of catching up to do – forty nine years later!!! James

The upgrading of the building in 1935 took place following its sale by William Morton who had converted it into a cinema in 1930. Mortons had to sell up because of their companies' financial difficulties.