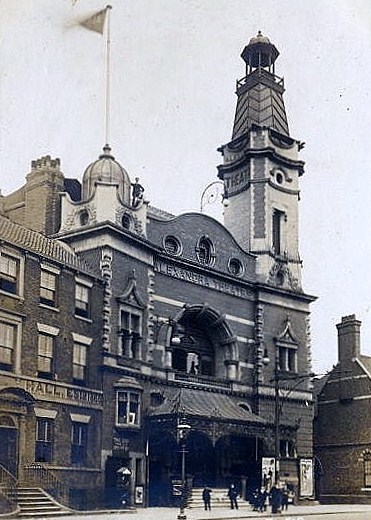 Located in the North Humberside town of Kingston upon Hull, in the East Riding of Yorkshire. The Alexandra Theatre was on the corner of George Street and Bourne Street. It opened on 26th December 1902 with a production of the play “A Royal Divorce”. Designed in a Renaissance style by architect William Guest, a feature of its exterior was a large tower on the Bourne Street corner. Inside the auditorium seating was provided in orchestra stalls, pit stalls, dress circle, balcony and gallery levels. The proscenium was 36 feet wide.

By the early-1930’s it was presenting variety shows.

The Alexandra Theatre was destroyed by German bombs in 1941. Housing has since been built on the site.

Additional historical detail and a picture of the the Alexandra’s site as it is today can be found on this webpage.

The Alexandra was built for William Morton, a significant manager of theatres and cinemas in Hull. His eldest son, George Morton was appointed manager. Initially Morton’s theatres would be co-ordinated. The Royal, already dubbed, ‘The Home of Grand Opera and Latest Musical Productions’, would have the higher class of programme while the Alexandra would be devoted almost exclusively to drama. “After that”, reminisced George Morton in 1934, “came other touring companies, and grand opera for seasons of four and five weeks”. He recalled the 80-strong Moody-Manners Opera Company. “Every grand opera star of those days appeared with it, including the famous Blanche Marchesi and Zela de Tessa.” Another Kelley production was ‘Theodora’ with a jungle scene and real lions roaming about the stage. Theatre-going had declined during the early 1930’s and, after several attempts to revive attendances with London-based touring companies,it closed in January 1935. It was reopened in December 1935 as a variety theatre, the New Alexandra, and managed by Terence Byron Ltd.

It is remarkable that both of this Architects Theatres was bombed during the WW2.