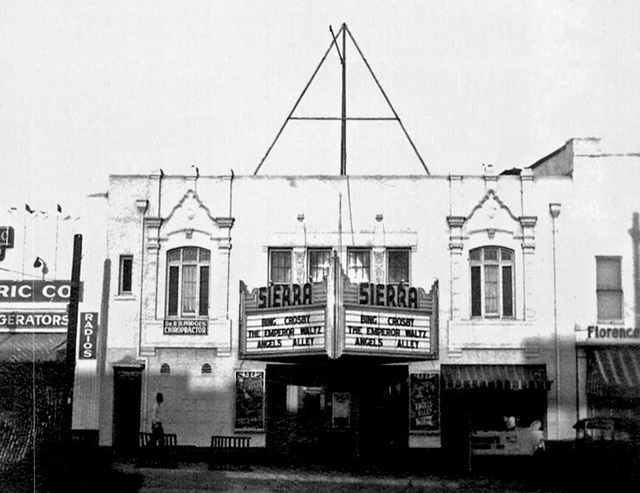 A small theater, one center aisle, at the end of the 5 streetcar line on Eagle Rock Boulevard in the Eagle Rock section of Los Angeles. During the early 1940’s called the “Dirty Dime”. It cost 10 cents admission. It was managed by the same person as the Eagle Theatre. He could be seen hurrying between the two theaters on a Friday night when the local teenagers were to be found in one or the other.

The last film I viewed there was, “The Bicycle Thief” the viewing of which was suggested as a homework assignment in 1946 or ‘47.

It would be interesting to know when the theater was built and any history.

The address of the Sierra Theater was 5058 Eagle Rock Boulevard, Los Angeles, CA.

Either this theater or the Eagle Theater was probably the one originally called the United Theater, which was referred to in an article in the Highland Park News Herald on July 23rd, 1926, on the occasion of its purchase by Mr. John Sugar, named as the owner of the York Theater. Mr. Sugar sold both of his Eagle Rock theaters and the York theater sometime later, as noted in an article in the Los Angeles Times of December 28th, 1928.

The Cinema Treasures listing of the Eagle Theater (currently listed as being located in Eagle Rock, California rather than Los Angeles) contains no information regarding former names it may have had in the 1920s, though a comment there says that in the 1930s it was called the Yosemite Theater, and later was known as the New Eagle Theater.

This picture is from the UC Davis collection, which generally concerns theaters in Central and Northern California. I don’t think that this is the theater in Delano. The caption doesn’t give a location.

That is the Sierra Theatre in Susanville, California. This picture from the U.C. Davis collection gives the location. Susanville is the county seat of Lassen County, and is about 90 miles northwest of Reno, Nevada. The Sierra Theatre may still be open, but it is not yet listed n Cinema Treasures.

Joe, you’re right on top of things, as always. Here are more pictures for future reference:

Here are three aka’s for the Sierra Theater. It was listed as the Eagle Theatre, at 5060 Eagle Rock Blvd., in the 1929 Los Angeles City Directory. An L.A. Times article of December 28, 1928, on the occasion of its sale by John Sugar, refers to it as the Eagle Rock Theatre.

Since the former Yosemite Theatre, more recently called the Eagle Theatre, did not open until May of 1929, this means that the Sierra was indeed the United Theatre bought by Sugar in 1926. So, this was called the United Theatre, probably from its as-yet-unknown opening date until (probably) some time in 1926; the Eagle Rock Theatre from (probably) 1926 until 1928, and the Eagle Theatre from 1928 or 1929 until… whenever the next name change came.

As there are no photos of the Sierra Theatre yet, I’m posting a link to this 1955 photo of streetcars on Eagle Rock Boulevard, even though the theater is about a block away in the background. So far, it’s all we’ve got.

Photo is from the collection of the Dorothy Peyton Gray Transportation Library and Archive at Flickr.

The February 18, 1922, issue of the trade journal Domestic Engineering noted that the Rounnel Construction Co. had won the contract to erect a brick theater building at 112-14 S. Central St. in Eagle Rock. This was probably the theater that became the Sierra.