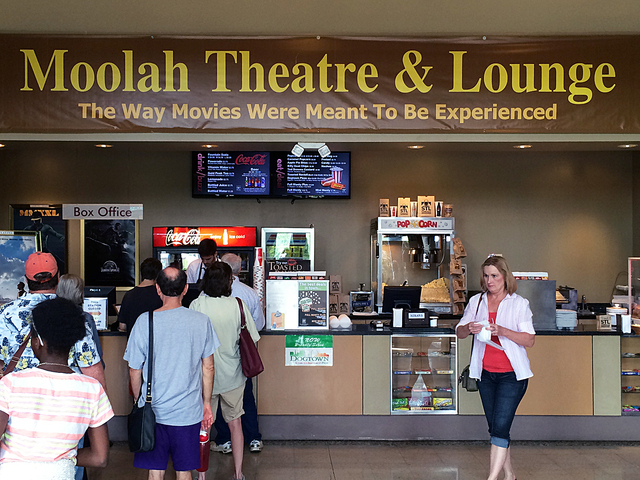 The Moolah Temple has been transformed into a vital and thriving center. It was built in 1912 and dedicated in 1914 as the home of the St. Louis Chapter of the Shriners. It was closed in 1988 when the Shriners moved to their new home in the suburbs on Fee Fee Road.

The Moolah Temple was completely renovated to become part of the Historic Midtown District, a popular arts, entertainment and educational district. It is across from the St. Louis University Campus and just blocks from the Fox Theatre and other venues along Grand Avenue.

The theatre section of the Moolah Temple opened on December 22, 2004 as a premiere theatre in St. Louis, a single screen theatre boasting the areas largest screen. Seating is on two floors with a balcony, with a total of 500. The theatre is operated by St. Louis Cinemas who also operate the Chase Park Plaza Cinemas located a short distance west of the new Moolah Temple theatre and they also operate the Galleria Six located in the Galleria Mall.

The exterior of the building has been restored to its original Romanesque, Arabic finish. The windows have been restored also with an eye for historic detail. The architectural firm Trivers Associates were responsible for the restorations.

Later there is a proposed bowling alley and offices in the building along with office space. A new garage has been built directly behind the Temple. The Moolah Temple Cinema was closed on March 16, 2020 due to the Covid-19 Pandemic. It was decided in May 2020 that the closure would be permanent.

The original architect of the 1912 Moolah Temple was Ernest Helfensteller.

Plans for the restoration were by Trivers & Associates, and interior design was by Kevin Kerwin, AIA, of HKW Architects, and by Checkmate Design.

Indeed. Closed March 16, 2020 due to the COVID-19 and STL Cinemas decided to carry on with just the Chase Park Plaza and the Central West End locations.