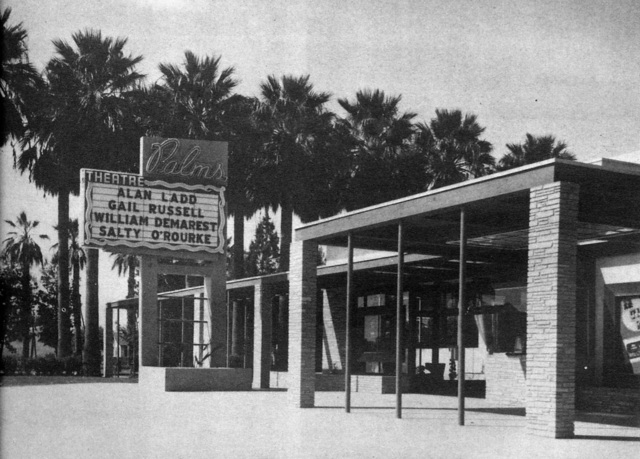 The Palms Theater opened on March 23, 1945 with Veronica Lake in “Bring on the Girls”. It was built for and operated by Paramount Nace Theatres Inc. Designed by Lescher & Mahoney, with William L. Pereira as consulting architect, all seating was on a single floor.

The Palms Theater was closed in 1981 and has since been torn down.

I was at the Palms the last night it was open. The last film they showed was “Gone With The Wind”.

The firm of Pereira & Pereira was dissolved in 1943, according to William Pereira’s entry in the AIA’s Directory of American Architects. William Pereira then operated his own firm until forming a partnership with Charles Luckman in 1951.

What a beautiful theatre!

I worked there in the summer of 1965. We were hired for the film, My Fair Lady. When I went for the interview there were at least 200 young girls waiting in line to get hired. They took us in at about four or five girls to interview. It was amazing. I could not believe I was hired. I had a great time there. I remember eating popcorn and the manager came into the theater and saw me sitting on an arm rest and motioned me to his office. Yep, I got a promotion. Then I was a cashier. Cannot believe how much fun I had there. It was my first “real” job. This was right before college began. Loved it there. D.B.

My grandfather, Wes King, worked for the owner of this theatre Harry Nace in the 1940’s. I am seeking any information anyone may have about Mr. Nace and his theatres. If you have any remembrances please contact me at . I would greatly appreciate it.

Harry L. Nace was an operating partner of Paramount-Publix Theaters!!

Do you have a connection to Harry Nace?

I remember as a child going to the Palms Theater to see the Sound of Music. I know it was exclusive to the Palms and played for a long time. Does anyone know how long?