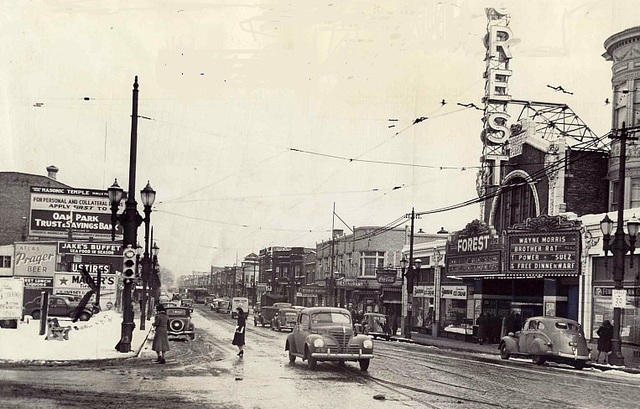 The Forest Park Theatre opened in 1920 at Madison Street and Des Plaines Avenue for the Ascher Brothers circuit. This 1,500-seat theatre was designed by architect Henry L. Newhouse and originally featured both vaudeville as well as movies before turning to movies exclusively. The ‘Park’ portion of the theatre’s name was dropped around the 1930’s. In 1937 it was rebuilt with 1,100-seats to the plans of architect Roy B. Blass. The Forest Theatre operated at least into the 1960’s, if not later. The theatre has since been razed.

This was a nice place to take a date in the 50’s. Clean and comfortable. Now, a McDonald’s stands on the spot.

Henry L. Newhouse was announced as architect in the Chicago Tribune, March 2, 1919, pE23

Here is a May 1956 ad from the Forest Park Review:
http://tinyurl.com/qdneum

The latest display ad I have found for the Forest Theater in the Chicago Tribune archives is dated February 16, 1961. They were running a double feature of “7 Hills To Rome” and “Houseboat.” So this is probably about when they closed. My mother says she went to see a movie there with my Dad when they lived in the area in the early 1950s. I currently live about a block away from where the theater was (there is a McDonald’s there now).

I’m positive the theater was torn down in the summer of 1963. I remember driving by with my mom on Des Plaines Ave. seeing the seats all exposed during the demolition. My family went there quite often, I particularly remember seeing “The Ten Commandments” there when the a/c wasn’t working. We felt like we were there in the desert with Moses.

This was opened on August 28th, 1920 by the Ascher Brothers. I uploaded its grand opening ad here.