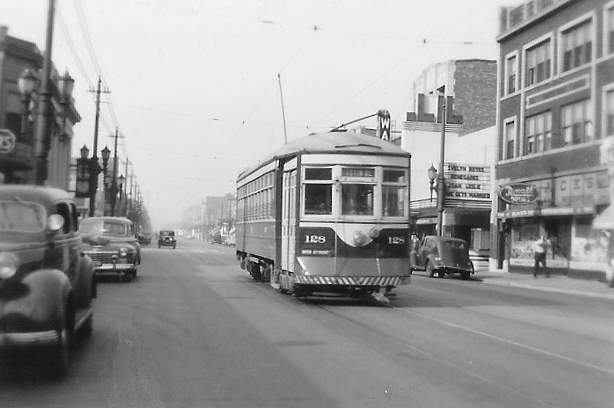 This Forest Park movie house was located, like the larger Forest Theatre, on W. Madison Street. It opened as a vaudeville theatre in 1886. It seated 500 and was in operation as a movie theatre from around 1912 as the Madison Circle Theatre. It was closed in the 1960’s. The building now serves as the Brown Cow Ice Cream Parlor.

The Lil had its auditorium converted into warehouse space for the liquor retailer next door. A friend of mine who worked at the store took me in back to show what remained, which wasn’t much.

Back in the mid 40s, my brother and I used to be taken to the Lil almost every Saturday afternoon. The theatre was filled with kids who got to watch, not only 2 full-length pictures (one always was a western) but also a continuing serial. So our parents had at least a 3 hour reprieve, and we had our enjoyment.

I walked in the door of the ice cream parlor and could tell as I walked in that the movie had once been a theatre. There’s a lot of ornamentation/molding still intact on the walls and ceiling, and the projection booth windows are still visible. The ice cream parlor has been outfitted with a variety of wood pieces salvaged from other theatres etc. The employees are fairly well aware of the history, that they are working on a false floor over the original sloping floor. Surprised there isn’t more here on this building, which is a lot more intact than many gyms, pharmacies, etc. conversions, and strongly encourage theatre lovers to stop in, have some ice cream, and look over the site in person.

I am the owner of The Brown Cow Ice Cream Parlor that is lucky to reside in this beautiful theater! From talking to customers and my neighbors who have been in Forest Park for generations, I’m able to put together a bit of its history.

The building was originally built in 1886 as a Vaudeville show house. When cinema’s became popular, they would turn old show houses into movie theaters. A projection booth was poured in about 1912 and it opened as one of the first theaters west of Chicago as the Madison Circle Theatre. It changed hands many times before becoming the LIL theater. It was known as the LIL because a larger theater with multiple screens was built down the street.

I would welcome any photos people have of this theater — I’ve searched through archives everywhere and have come up short except the same photos you have posted here.

The theatre closed in the 60’s and has been a liquor warehouse, a bath and kitchen show room and Krenek’s Antiques. The original pitched floor still exists under the leveled floor. It was leveled over the the pitched floor, over the orchestra pit to the stage. The far room with the stage is closed to customers and serves as storage but you can easily see where the screen was.

The projection booth is still in tact as is the original blower system to the building. Although they don’t work and the building has been chopped up with false walls, plumbing and electric over the years – you can still see that it was a theater and we do our best to preserve it’s beauty and capture the era.

please email me if anyone has more information.

I am 74 years old & grew up in this neighborhood as did both of my parents. As long as I can remember the LIL was closed. It had a permanent sign on the marquee that said, “Attend The Forest, Now Showing, 2 Great Family Hits”. My dad said that he went to the LIL when he was a boy to watch the Saturday serials. Sometime in the 60’s, someone bought it, leveled the floor & turned it into a banquet hall called LIL MANOR. That didn’t last very long as far as I remember. The Forest Theater down the street was also a single screen theater. It closed in 1961 & was torn down in ‘62 or '63.