The End of the Ambassador Super Cinema 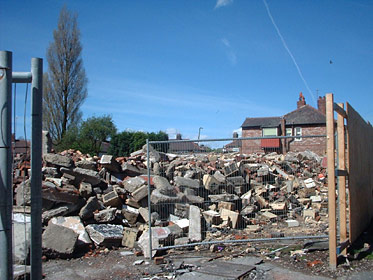 SALFORD, ENGLAND — As seen in the photos below, yesterday saw the complete demolition of Salford’s Ambassador Super Cinema. After all the efforts of action groups and supporters, the cinema has finally been laid to rest.

Flats will now be built on the site and the new owners will probably never know the heartache that locals felt when the theater was finally pulled down.

I have heard so many wonderful stories from people who were brought up going to the Ambassador — it really was a credit to Salford. 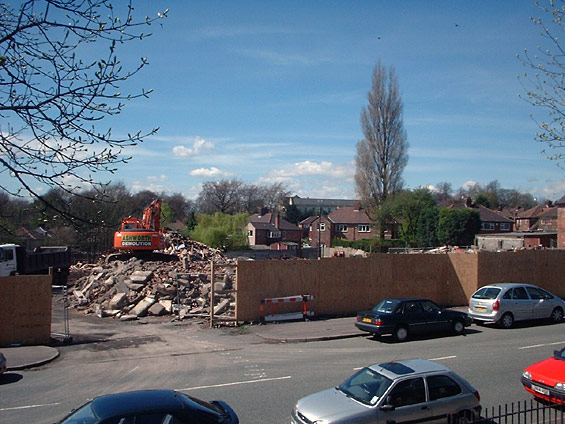 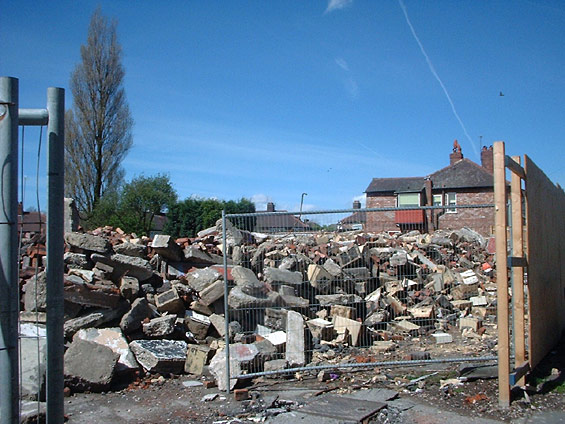 Thank you Andy for posting the photos. I also appreciate the photos you posted at geocities. It is heartbreaking to see these old ladies pass on. They will never be replaced. We have a little 700 seat combination theater, movies and vaudeville, that will probably soon meet the same fate. Keeping up on such losses here at cinematreasures.org I am sad to witness the constant destruction of these unique treasures. Soon, the whole world will be shopping strips and apartment buildings. All alike. The developers are the undevelopers.

I couldn’t agree with you more, John. It would seem to make more sense to renovate the old theatres and build new shops around them with the same design theme as the older buildings/theatres. Some developers have used that idea with some of the new major league baseball parks and it has been very successful. Instead of stripping away a neighborhoods identity, they could add to it.

It seems to me that they are not thinking ahead on these matters, my son goes to a multiplex in the next town and he often notes how he is one of six or seven sat in a deserted auditorium. This multiplex has put the original cinemas out of business. It has 13 screens which are showing all the latest releases, but not all the releases will be a hit and the ones that are can not be given the justice that a 1200 seater auditorium can give them. So in a few years time theres a good chance that these uglier buildings will face the same fate of the grand cinemas.
As a volunteer at the Stockport PLaza( www.stockportplaza.co.uk )
i can try and help put back some heritage and pride back into cinema and theatre. Cinema treasures is a fantastic way of finding like minded people with a passion for keeping cinema and theatre original!

There needs to be some kind of non-profit national trust/origination setup to compile a list of endangered theaters and have them step long before any talk of demolition to save the theater(s). We are getting involved too little, too late and letting this happen. We are loosing our history!

The loss of the cinema is sad —– but I must say that the photos of the scene of the crime are absolutely outstanding!

That’s a good idea, Ed. Some local developers and city governments have rushed these demolition plans through the process, and by the time the public finds out, it’s too late. A national organization would be able to let the public know in the early stages what’s going on and what their options are.

developers
who needs em? they are doing what they want…….
making money.
what do we get??? cheap and nasty looking
appartments for posh people to spend 170,000 quid
on 1 bedroom boxes.