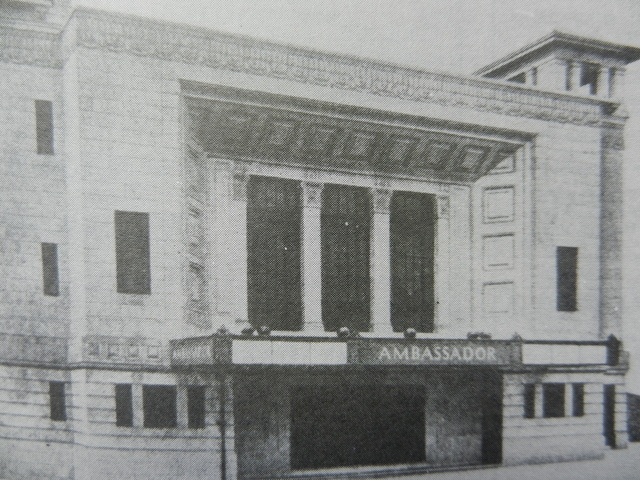 Designed in an Art Deco style, by prolific cinema architect John Knight in 1928, the Ambassador Super Cinema was the only remaining example of Knight’s many theatres in the northwest area of England.

Built for the Snape & Ward circuit, the Ambassador Super Cinema opened on December 24th 1928, the opening films were Emil Jannings in “Vaudeville” and Conway Tearle in “Enemies of Society”. There was also a variety programme on the 16 feet deep stage. It had a 40 feet wide proscenium, six dressing rooms and an orchestra pit, which contained a Jardine ‘Rex Gloria’ 3Manual organ. The Ambassador Super cinema featured a strong symmetrical façade, a projecting centrepiece flanked by Italianate style towers, and fluted Art Deco style moulding the full width of the façade at cornice level.

The theatre’s interior was very well preserved. The foyer had a marble staircase with metal balustrade on fluted posts and windows with decorative coloured glass. The auditorium had a coffered ceiling and a fluted frieze matching that on the exterior, as well as a narrow balcony to rear.

The side walls were decorated with stepped panels under shell moulded plaster hoods - both of these mouldings inspired by the 1925 Exposition des Arts Decoratifs. Decorative shields with winged helmets and drapes at beam ends to ceiling coffers.

By 1963 it was operated by the G.B. Snape Group of Assoc. Cinema Companies chain. The Ambassador Super Cinema closed on 28th November 1964 and was converted into a Mecca Bingo Club, who kept very well maintained.

A preservation group were attempting to raise the funds to purchase, renovate, and develop the building into a community media and arts centre.

Although this was designated a Grade II Listed building, the Ambassador Super Cinema was stripped of its designation and was sadly demolished in April of 2004.

Hi Cath
Email me at and i will give you my number.
Regards

sorry you could`nt save the ambassador.
what chance have nobodies got when contractors and councellers
are in the same bed?????

Hi
I dont have any unfortunately.
Regards

According to the developers, this building had ‘little architectural merit’! I wonder if future generations will say the same about what has been built on the site!

….and that’s just the outside!

May all concerned in this wanton destruction of our Heritage, hang their heads in shame.

Ive been driving past this building for about 40 yrs now. Fantastic building. What a great shame its now just another mini housing project.
We simply cant demolish glorious buildings like this, time and time again.
Salford council should resign, en mass.

A couple more pictures taken just prior to demilition here:–

As per usual listing status means nothing when money talks.

The Ambassador was a lovley cinema. My farther was the sound engineer so we would go there once a month. I used to work with one of the projectionist, a man called Don Collier. In 1982 a freind and I removed the 2 BTH SUPA projectors. I rebiult them and used them in my home cinema.

Interesting, Mr_BTH. I also used to work with Don Collier and assisted him at The Trocadero and The Imperial. His day job was running my local fish & chip shop on Cavendish Street, Ordsall, along with his wife and kids. He it was who told me that, as Snapes were closing houses, or converting them to Bingo, The Ambassador, or simply The Ambass, as it was known in-house, was used to store all the projecting equipment removed from elsewhere. There were supposed to be row upon row of the ‘Big Guns.’