Loew’s to Become a Foot Locker? 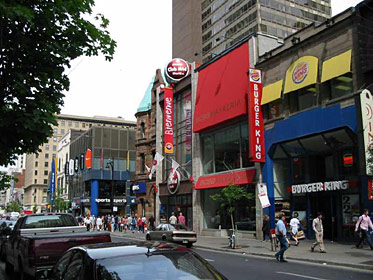 MONTREAL, CANADA — I passed by the Loew’s (Club Med World) and a contractor’s sign is on the front of theatre reads that Foot Locker will move in. The “space for lease” sign still remains, therefore I think this theater will split up soon.

Just what St-Catherine Street needs, another shoe store! Considering the space is so big, they will probably take over the former lobby, stripped of any original features long ago. Who knows what will happen to the auditorium which was somewhat restored by Club Med after Loews turned it into a multiplex. At least Club Med made some effort to respect the original space that Loews had butchered. The auditorium was huge when I saw it not so long ago. With the Palace destroyed and empty down the street, these are difficult spaces to re-use. I know of one group which tried to host events in this theatre but their requests were turned down.
Unfortunate, there could have been a much more creative way to use this facility then by once again turning the lobby into a store and mothballing the auditorium (speculating of course).

Well,my old twin theatre is half church and half music store. I wish they would have just torn the darn thing down.My poster frames are still on the front of the building!