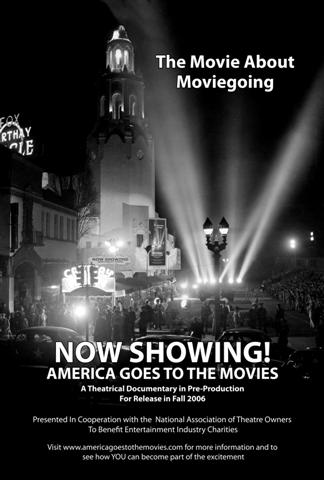 LOS ANGELES, CA — With the working title, “Now Showing! America Goes to the Movies,” the first comprehensive feature-length documentary celebrating the history and excitement of the moviegoing experience, was announced today. To be filmed in High-Definition widescreen and slated for theatrical distribution in Fall 2006, this documentary, currently in pre-production, will recount an all too important, but largely untold, part of film history: The story of motion picture exhibition and how moviegoing has influenced the cultural and social fabric of America—while reminding us all why, after over a century, movie theaters still enchant us.

As the unsurpassed theatrical experience of watching films as a community has come under attack, a group of filmmakers, writers and producers, all industry insiders, have joined forces to remind everybody what the magic of the movies is all about. With this new documentary, David Strohmaier, the director of “Cinerama Adventure,” AJ Roquevert, the producer of “No More Joy—The Rise and Fall of New Orleans' Movie Theaters” and Ross Melnick and Andreas Fuchs, the co-authors of the award-winning book Cinema Treasures—A New Look at Classic Movie Theaters, invite audiences to share over 100 years of memories, excitement, and, of course, entertainment.

“We hope to make this film a pop culture phenomenon that inspires audiences to think about these places where they go to laugh, cry, and share many a wonderful dream,” the filmmakers jointly stated. From the early pioneers, entrepreneurs and inventors, through the golden “movie palace” age, to the post-war era of drive-ins and suburban cinemas, and all the way into the modern, digital era, “Now Showing!” will recount the exciting tale of how “America Goes to the Movies”—then and now.

“This documentary presents a unique opportunity to finally tell the long overdue story of theatrical motion picture exhibition in the United States, with all of its fascinating, diverse, and compelling narratives,” said AJ Roquevert, writer and co-producer of the new documentary and head film buyer at Starplex Cinemas.

“The grandeur of the movie theatre and the excitement of moviegoing is a story that can be best told through the medium of motion pictures itself,” stated writer-producer and film historian, Ross Melnick. “We look forward to capturing this exciting story through contemporary interviews as well as historic documents and photographs, ephemera, newsreels, and oral histories, to share a part of film history with audiences that most documentaries about Hollywood leave out.”

Concurred writer-director David Strohmaier, “These incredible human stories and events, some hilarious, some tragic, will be told through personal reminiscences of not only the exhibitors themselves, but also from well known actors, noted film directors and industry executives, public figures, and, of course, the moviegoing public. "Now Showing!” will feature first-class production values that are fit for the big screen."

“We are, in fact, mobilizing the entire industry to get behind this project in creating the best and most entertaining documentary possible,” added writer-producer and exhibition consultant, Andreas Fuchs. “In addition to offering a contemporary, very much of an insider’s view, "Now Showing!” will have a unique theatrical distribution and marketing plan with profits benefiting charities of the entertainment industry."

While further details will be announced shortly, the producers of “Now Showing! America Goes to the Movies” have already secured the full cooperation of the National Association of Theatre Owners. NATO is the largest exhibition trade organization in the world, representing 40 countries and more than 29,000 movie screens, operated by the ten largest as well as over 500 smaller companies, in all 50 states.

Said MaryAnn Anderson, NATO’s Vice-President and Executive Director, “Our membership recognizes this opportunity to celebrate all of the fun and excitement that makes going to the movies one of America’s favorite pastimes. The people who built a major American industry on the nickels and dimes of an ever-changing audience have always showed vision, showmanship and tenacity in the face of often fierce competition. This has never been truer than today. Through this exciting documentary, we look forward to sharing our passion to entertain with audiences around the world.”

This is great news and will cover a subject that has been woefully neglected by the movie industry. Best Wishes to all concerned in this project.

I can’t wait to see it (will it get a distributor in the UK and Worldwide?) Will it be released on DVD at a later stage? Will there be a book of the movie?

“Filmed” in high definition? A video about the moviegoing experience.

Don’t get me wrong, I’d like to see something on this subject, but if they are going to do a feature on the moviegoing experience, then it should be shot of film and shown on film. Otherwise they might as well just put this stright to video.

High definition, eh? I suspect we’ll see this in all the digital theaters in ‘06. Maybe by then, Landmark will have their new 4K projectors installed but they have such small theaters here in the DC area. How do you 'experience’ say, Cinerama on a 25' flat screen?

Yes, this is great news, and I look forward to seeing it, even if the prime venues to see it in —the movie palaces— are gone from us for the most part. Perhaps they will therefore seek to incorporate into this new feature the 1987 color documentary “The Movie Palaces” by the Smithsonian Institution so as to represent that era and so as to preserve that title which originated on VHS video, and is still in a few libraries in that format. Such tapes will not last for many more years, and since the Code of Federal Regulations states that the Fed. government cannot legally copyright anything (produced with tax dollars, as was this documentary), then it can be incorporated without government permission or payment. The copyright notice on that work is therefore bogus, and carries no legal weight; see United States Code: Title 17, Section 105; or:
View link

OF additional concern is the statement about it being issued in “High Definition” which causes me and others here to conclude that it is to originate in a digital format and therefore worry about the permanance of the original medium. All digital media are subject to abandonment over the decades even if the physical format survives and there is no assurance that any device will exist decades from now to display the digital medium or be able to convert it to the then modern media. For this reason, I implore those responsible to make the original medium a quality FILM, with perhaps simultaneous digital recordings. Such dual media will assure us that photographic film will be in a vault to safeguard the document, perhaps long after the digital format has become obsolete or forgotten and unreadable. This is one of the reasons that the VHS documentary I mention above, should be incorporated into or transferred to this newly created film, perhaps as an Appendix. The Smithsonian Institution, a division of the US government, should be contacted to gain access to their master recording, but if they are not forthcoming, other copies available would also lend themselves after some slight remastering, including the removal of the initial frames containing the non-legal, bogus copyright claim. Though the Theatre Histroical Soc. and a company called Vision Associates were acknowledged as participating in the creation of the documentary, they are NOT listed as joint copyright holders, hence the work is entirely a creation of the government under the law. The notable people appearing in that documentary are now deceased, as will someday be some of the operating theatres shown there, so this is another reason to preserve this sample of our theatres/film history.

“Film is a dying format”. That’s a bunch of b.s. Sounds like you’ve been listening to the digital video cinema marketing hype.

“Manwithnoname” does perceive that film will eventually disappear, and I concur, but as Ken Layton brings out, it will be with us for some time yet. The point I make, is that while film may be the more expensive medium at present, it is also for the present the ONLY practical medium of analog record that is not dependent upon a new technology to play it. With modern digital formats appearing and disappearing —the way analog tape (VHS) is disappearing at present— the time will soon come when we will have to depend upon at least a lone film negative to be preserved in order to be converted to any new digital format that may arise with new machines and media in future.

By all means, the new “films” should be issued in today’s digital formats, but ALSO retained as as permanent negatives in a film vault to enable future use and duplication into the new digital formats then popular. This really should be the policy for ALL visual productions until such time as a more permanent direct visual record can be devised. Currently, the only color elements of a visual record that will not decay within a century are the mineral pigments of such as stained glass and ceramics, but no one has figured out how to make a moving image upon an inorganic substrate from these, sad to say. When someone invents this totally inorganic moving image, we will all be eager to hear of it!

Ya history is important.
i’ve seen this doc.
genuis