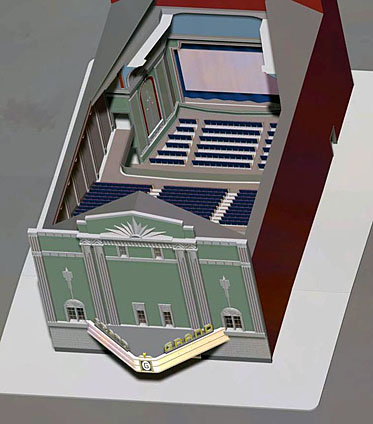 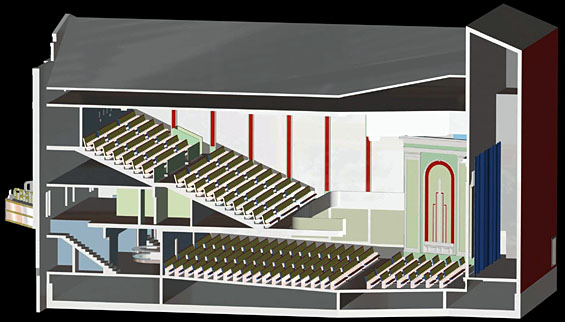 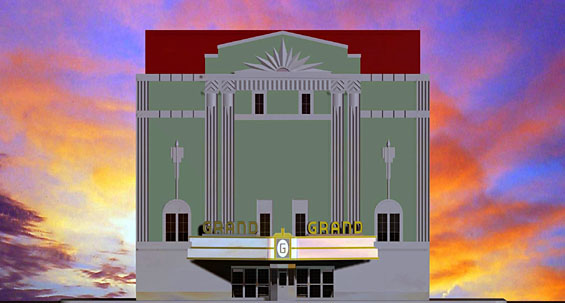 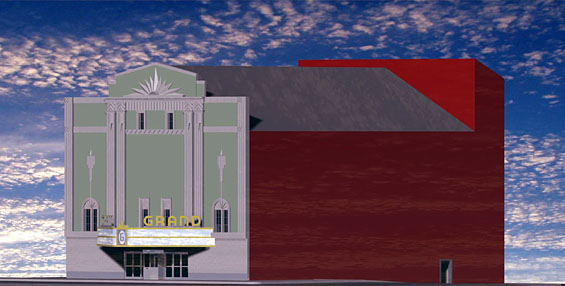 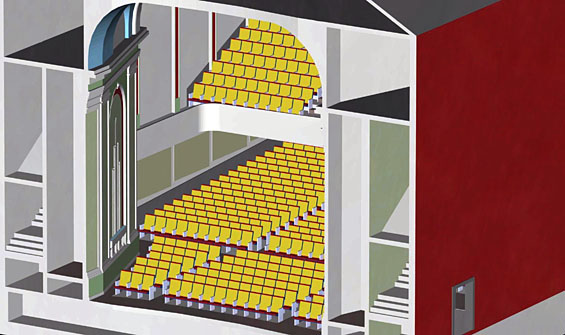 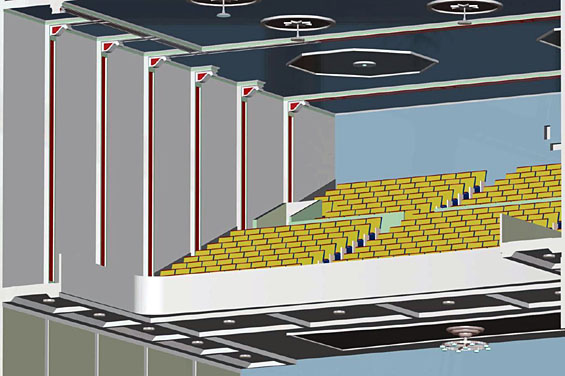 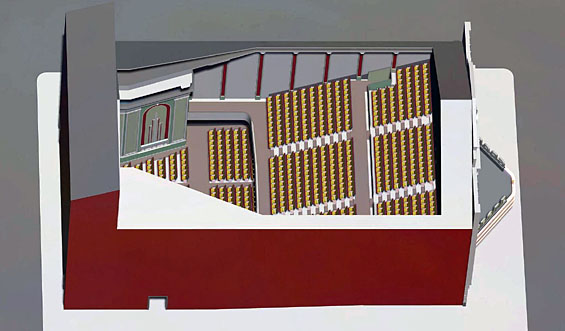 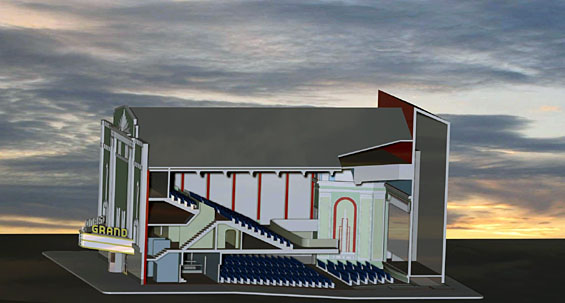 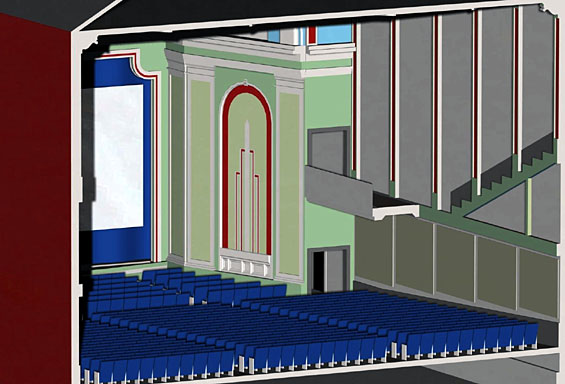 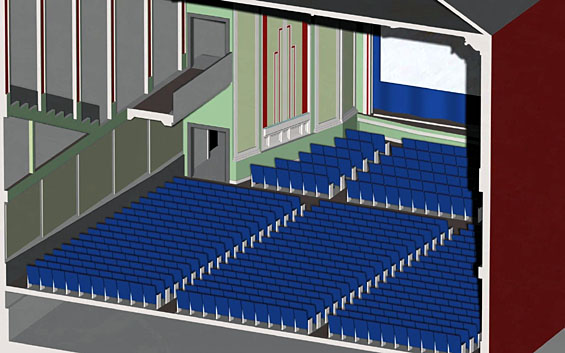 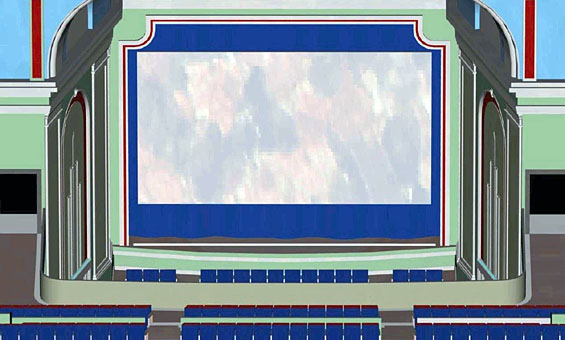 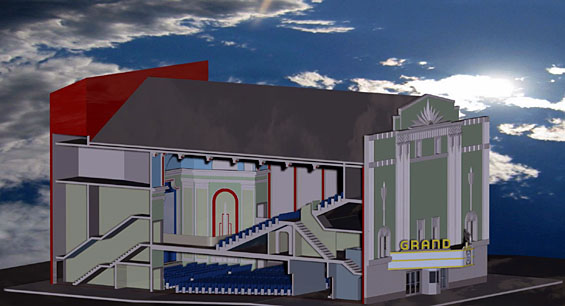 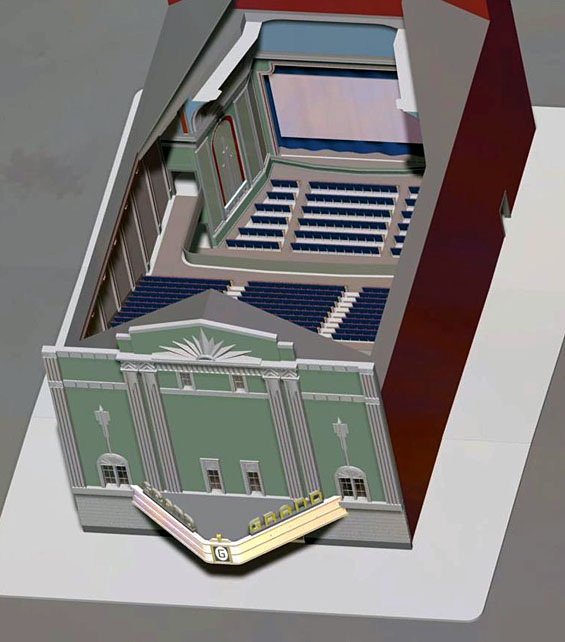 And THIS was demolished? I just hate that word!

Great drawings! Has everyone seen the Sims games? I think someone should write a computer game called “SIM Cinema” so we can run a simulated theatre.

These were done using the engineering 3D design software Pro Engineer (and built in PhotoRender). I did this just to fully remember how the theater looked, inside and out (before I get older and forget….lol). I’ve even done some renderings/picture with a few movies ‘showing’ on the sereen (and had played there), from the perspective of both the floor and balcony seats.

My final way of preserving a piece of lost history.

Simply amazing… I am at lost for words. Great job, Ed.

The day that they invent Sims Cinema will be the day that I quit my job. :) Ahh….to manage a theatre without the sour soda and rotten popcorn trash smell. ;)

Great job on the renderings. I wish we had someone here in Danville, VA to do a 3D rendering of the old Strand Theatre before it’s gone. Great idea for the SIMS Cinema game.

Ed you should do this fulltime. I’d willingly pay for some 3d renderings of my favorite old cinema the Ambassador, Salford (sadly demolished last year)I have loads of photos amd acouple of movie files if you’d be interested. My email is

This would be great to put a database of old theatres with.

First of all- – Great drawings!
Secondly- – There already IS a “SIM CINEMA” game.
Ironically I accidently stumbled across it on-line about a week ago.
In the game,you go through the whole movie making process from script through distribution and getting it into the right theatres.
Do a simple YAHOO or GOOGLE search on “SIM CINEMA” and you’ll get several hits on URL’s where you can download it. Have fun!
JimC/SanFrancisco

I wish I were a little more computer literate.
I have a great book on the long-ago-demolished San Francisco FOX theatre which contains reproductions of many of the original blueprints, floor plans and other types of architectural drawings. (Along with about a hundred photos)
I assume that if I knew how, and had the right software I’d be able to do renderings of THE FOX similar to the great job Ed has done for THE GRAND.

HEY ED> I’m curious about two things:
1) Approximately how long did this project take you?
2) Did you the renderings totally from memory, or did you also have some documentaton or photos to help you.
They’re great; no matter how you did them. :)

Jim, thanks for the compliments! Really appericated. :–)

I started doing this part time with the occasional down/free time at work and home (yes, you nasa tax dollars at work….lol). Started begining of December and finished up middle of January. The best I could figure would be about 3 weeks if I was doing it full time. But when you’re enjoying something, time flys by.

Primarly I did this from memeory and pictures. I got in to the Grand last January, the day before it was demolished and took a few dozen pictures. I also have pictures from the 40s. I found out that the lost size for the theater was 60' x 120' from city records, so I used that as a baseline in referencing the pictures. I did have to ‘fudge’ a few things, because I never got into all of the areas of the theater, backstage, basememt………etc.

I wish I was lucky enough to have had a detailed book like yours, would have made it a lot easier. The owner of the Senator Theater (here in Baltimore) told me that his brother may have the original blueprints of the Grand, but I have a feeling it would be difficult to get a copy.

There’s plenty of 3D imagining sofware out there, I just used ProEngineer because it’s the one I have the most esperience on. I’m sure you could find one that you could user friendly.

Please feel free to email me, I have a lot more pictures and 3D renderings.

Poor old Grand—my favorite of all Baltimore’s neighborhood houses; the crown jewel of East Baltimore. Torn down to provide space for a library that the city will probably never get around to building.