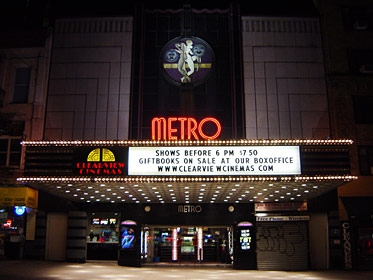 NEW YORK, NY — According to this report from the New York Times, the New Metro Twin has closed for good and the theater’s owner is planning to gut the interior.

While the theater’s exterior has been an official landmark since 1989, the interior does not have the same protections. (You can see a few shots of the interior here.)

Mr. Bialek has been authorized by the Landmarks Preservation Commission to demolish the interior of the Metro, whose exterior was declared a landmark in 1989. He said he is considering leasing the space to a dinner theater, a restaurant or a store, or perhaps reopening it as a multiplex.

This is indeed a sad day for moviegoers in Manhattan. The megaplexes continue to eat away at the city’s remaining single and twin screen moviehouses.

(Thanks to Howard Haas for sending this in!)

That’s a wonderful photo at night.

New Yorkers should lobby the owner to keep the interior decoration, and if won’t again be a moviehouse, double up your efforts to patronize the surviving historic venues! And, yes, by historic, I mean those post WW2 houses such as the Ziegfeld, the Paris, Tower East, City Cinema 1,2,3, etc.

It seems like the NYC Landmark Commission is becoming famous(or infamous) for tearing down old landmarks instead of building new ones. Not good.

Yeah, I remember the night I shot that one.

It was bitterly cold and I was standing in the median between both lanes of traffic on Broadway. To get this shot, I had to wait until there were no cars or pedestrians in the way… quite a difficult thing to do in Manhattan!

Eventually, someone from the theater came out and started harrassing me for taking pictures of the theater. (They didn’t seem to understand it’s perfectly legal to do so.)

Wow! In the closing weeks of the Loew’s Astor Plaza, employees told me not to continue photographing the interior. However stupid for a closing theaters employees to object, that was their right. And, keep in mind, there weren’t exactly treasures in the Astor Plaza that anybody would be stealing after seeing photos.

Ridiculous for an employee of the New Metro to object to your photograping the exterior! They truly needed customers- and good PR, so badly that they should’ve brought you coffee! And, of course, on a public street, you had the right to photograph commercial buildings.

The thinking is that eventually movies will be launched in one of three ways at the same time: on DVD, in theaters and through some kind of pay-per-view venue (like DVD On Demand).

The new Steven Soderbergh film “Bubble” is the first to be released this way.

This is going to greatly effect how movies are distributed. Some feel that even though the films will be available on DVD and through on demand, there will be enough of an audience who will want to see a movie on a movie screen. Of course, only certain movie venues will remain to handle what is certain to be a small movie going audience.

I agree with others who said that the reason why the Metro failed was because of poor bookings. But it’s also the nature of movie going these days.

Good points CConnolly. I’ve read about the whole “universal release” theory associated with the Soderbergh film and saw a news item about it on one of the local channels that referred to the practice as “day and date release.” That’s a phrase I’ve read about in these web pages referring either to movies that were booked simultaneously into 2 or 3 first run theaters in the same market or to a small group of theaters that routinely shared identical bookings in the same market for particular engagements. The industry (at least the artistic community) seems to be sharply divided about the whole scheme. And we can all figure out where NATO stands on the issue. It’ll be interesting to see how it all plays out.

As for taking photos… I suppose if you stood in front of any edifice and starting snapping shots and someone inside the building noticed you, they’d probably want to inquire as to your business – unless its the Empire State Building or some other “Kodak Moment” landmark. I took some photos of the Fair Theater in Astoria and when I got into the outer vestibule to photograph some of the display cases, a manager came out and told me to stop. I wasn’t inside the theater, but I suppose once I broke the invisible plane that seperates the sidewalk from the recessed space under the marquee, I might have been on private property, so I acquiesced. Plus, the Fair is a porn-house and the manager was accompanied by a security guard, so I quickly figured that it wasn’t worth a possible broken leg to pursue my interests against the owner’s wishes.

**General letter campaign form: Please write letters &/or e-mails to the Landmarks Preservation Commission, urging landmark designation of the interior of the Art Deco New Metro Twin. Reflect upon its significance, and personal insight, if possible:

This theater could never make money as a theater , cute theater nice location ,never made a dime.

The Metro survival has more to do with the trendy Upper West Side getting better all the time than its appeal. Aside from the stunning facade it is not much of a presentation inside.

By the way, in Britain we always question anyone taking theatre photos. It comes from years of terrorist paranoia and all public places will either prohibit this or at least ask questions outside the tourists spots.