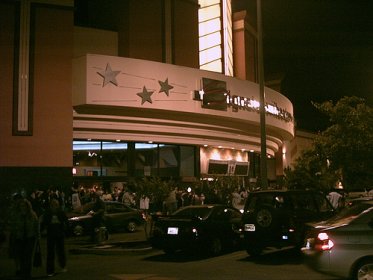 Waiting outside in the dark for hours and it’s below freezing. Flying cross country and then back in a two day span. Checking Fandango every ten minutes to see if they’ve announced the times yet.

Before I found my love for movie theaters, I had my passion for movies. One of the extra special parts of moviegoing is when those big event films come out. You might have seen the trailer six months or even a year earlier. As the months go by, the anticipation only grows. And then finally, one day, it’s release day.

For me, when it comes to big event films, there’s only one way to go; the midnight movie opening night. No matter how little sleep I got the night before, if it’s something I’ve been waiting for a long time, I am wired once the late evening comes around. There’s just something about seeing a movie like that when it’s just you and the hardcore fans. Plus, the guarantee of almost no children doesn’t hurt either.

With one friend we even have this deal where each year one of us travels cross country to the other and we see the most highly-anticipated event film of the year. Of course, we see it at midnight at the most prime location in town. Sometimes, what we’re actually going to see is up for debate but never how we’re going to see it. Our parents to this day don’t quite understand why someone would take a vacation just to see a movie.

While I seem to have years and years experience being that I have so many memories, that’s not quite true. My midnight movie memories are entirely restricted to the past ten years. I’m anxious to know how this tradition has changed over the years. Of course I’ve read about it in the 70’s but what about before that? For something so tied to the event films that have been such a huge part of moviegoing since “Jaws”, how does it translate to different genres and times?

I’ll tell you one thing. Don’t take the midnight movie too far. Be careful what you choose to see. So enamored with the whole ordeal, I’ve often taken it too far by choosing to see films at midnight opening night that don’t warrant such treatment. Some of ended in my driving home in a bad mood at 2AM. Others turned into a big nap for me in the theater. The morale of that story is to make sure you are completely into it before you sign up. Think about what you have to do the next day!

It’s something you should try to do once though if you’ve never done it. Pick a film that you know you’ll enjoy and of course decide on the most ideal venue. Take a nap beforehand if necessary, arrive early, find the best seat and then let the entire experience soak in!

(Thanks to Don Solo for providing the photo.)

Google ‘rocky horror picture show’, which I think may be the quintessential midnight movie according to many sources.

I cherish the 12am openings for ‘event movies’. The crowd is lively and not disrespectful, because most people who attend those showings REALLY want to see the movie. Two of the my favorites were an X-Men 2 opening and of course Return of the King. The owner of the theater (Mission Valley Cinema (Bill Peebles) – Raleigh) personally came to the front and gave a little speech…it built the excitement. I saw Pirates of the Caribbean 2 opening 12am showing (6 screens) at a big box multiplex and it was wonderful – even for the sheer amount of people who dressed up for the film.

For college campus cinemas (second-run), I think 10 and 11pm showings are the most packed.

Here are a few of my favorite “midnight” experiences…

Michael, I’d be very interested to hear what constitutes an “ideal venue” for you these days.

Last midnight premieres I went to were CHICKEN LITTLE, with a live LOUD band (not too great unless you like hearing Zach Braff use four letter words in a theatre full of kids) – and CARS, which was fun to finally see after a long wait. Both at the Glorious El Capitan which is high on my list of preferred theatres, particularly because it IS a THEATRE, and not a generic cinebox. Happy Holidays everyone.

I can highly recommend the Midnight Madness program (if they still do it) at the Toronto International Film Festival. Unfortunately no longer in the Uptown

I did this a couple of times, years ago. One was for “Batman,” and I had to sit in the first row, it was so packed.

Second was “Dick Tracy.” You had to buy a special T-shirt that was more than the normal ticket price.

Haven’t been to a midnight movie for a new release in years.

Midnight movies can be lots of fun! I’ve watched midnight showings of “The Warriors” , “The Goonies”, and afew other movies at the Coolidge Corner Theatre, in Brookline, MA, and I once watched an all-night Japanese Animation Marathon, which was lots of fun, even though I was only able to hold out until 1:00 a. m., when I drove back home again. It was well worth the $20.00 that it cost for admission, however.