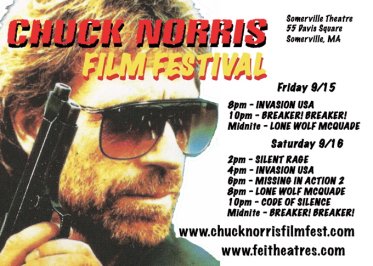 War, Terrorism, Natural Disasters! In these uncertain times, in an uncertain world, where everyday it seems we are at or over the brink, One man gives us the strength to forge ahead and fight for all of us. On Friday September 15th and Saturday September 16th The Somerville Theatre presents 6 films starring original action star Chuck Norris. 6 Films…Two Days…One Man!

Are these on the Big Screen?
(Yeah, I know I could just walk over and ask…)

You know what blows my mind that there are 35mm prints of these films and none of most Hollywood classics.

I don’t think I could stand such excitement all in one package! Please notify me when they show The Best of Alfonso Bedoya.

Now, if you’ll excuse me, I have some suggestions for the Ziegfeld Classics series. ;–)

I was thinking the same thing, MovieMatty! No “Octagon” with the immortal Lee Van Cleef riding shot gun! And what about Chuck’s breaktout hit “Good Guys Wear Black”?

In all seriousness, RobertR makes a great and discouraging point!

Just like the Hollywood Classics…you would be amazed (or maybe not) at how hard it was to track down some of these titles. The Delta Force and The Octagon were two of the first three we tried to get but just couldn’t seem to track them down. Still not a bad selection though…Silent Rage, part Halloween, part Walker Texas Ranger, and part Re-Animator! And Lone Wolf Mcquade…Norris vs. Carradine in an epic karate battle! Breaker! Breaker! Nothing like Big Trucks, Bikers, Prostitutes, and Red Neck sheriffs. Will be a good time regardless…and heck there is always next year?

Despite the aforementioned “glaring” omissions, it is a fine selection and I am impressed that you were able to track down the titles in your selection.

But I agree with Robert and Ed. In all serious, read the Ziegfeld thread and see how disheartening it is to learn just how sorry a shape film preservation is despite the noble efforts of a few magnificent souls (Robert Harris comes to mind as one). Especially with regards to certain timeless film classics. I guess such is the price in these digital-happy times but still…

To answer Ron’s query, no, because of renovations they are not in the Main Theater, as the new movie screen for there is still on backorder, and our new sound system is not in place yet.

I wholeheartedly agree that film preservation is currently a sad state of affairs given the money at studios and the vulnerability of film stock.

One of the reasons we did this Chuck Norris fest is because Boston used to be a real blue collar town, and now there is a lot of pretension about everything in the area. So we figured if art films get retrospectives, why not something a little more down to earth?

Plus, we’ve tried some older/classic revivals that did little business, but found that 80’s flicks and cheesy cult movies still manage to draw crowds. Throw in Chuck Norris' sudden status as a pseudo-cult internet personality amongst younger folks (the ‘chuck norris facts’ website for example), and we figured it would be a draw for the area residents.

And for jmorong and I there is also the fact that as a generation, these films were how we spent our Saturdays at the cinema, or what was always on our local UHF stations on rainy afternoons.

I wonder if digital will mean programming special stuff will be easier. I personally believe it will never look as good as film, no matter if it is Casablanca or Delta Force!

Hmm, maybe try a Schwarzenegger festival next? I think he has more name recognition these days than Norris, but I could be wrong.

Back in the Garen Daly days, Terminator was always a big draw at the Somerville.

Some other non-‘arty’, action-oriented festivals that might be fun:

Yes. The so-called “Chop-Socky” genre would make for a great festival. I’m in NYC, so it isn’t likely I’d attend, but I’m sure a classic ‘70’s & '80’s grind-house festival might go over well. Tracking some of THOSE prints down could be awfully tricky, I bet!

I really do wish that studios (or whoever owns the rights to old studio back-catalogues) would strike fresh prints more often when restoring films for DVD release. I see so many extraordinarily pristine showings of classic films on Turner Movie Classics and the INHD cable services! Why not run off a couple of prints and throw them back into circulation to remind folks of how great our cinematic heritage is, particularly when experienced the way they were originally intended – with an audience of enthusiastic patrons in a darkened theater and on a big old silver screen! Is the cost so great for such PR? Where is showmanship in this industry???

Films at the Gate is an outdoor festival of such films, currently being shown in Boston’s Chinatown, every night through this Sunday.

We’re overdue for a proper theatrical re-release of the Bond films. At least the first 3 or 4.

Personally, I think this is gonna rock! :)

Way to go Summerville great to see some norris

Chuck Norris seems like a nice guy,but he is no where in the league of Eastwood or Bronson.