Long run over for Esquire Theater 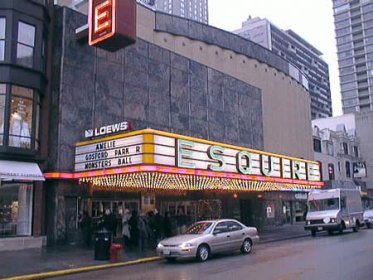 CHICAGO, IL — According to the Chicago Tribune, the Esquire Theater in Chicago is closing and may be demolished as soon as next year. One possible proposal is mixed retail and hotel.

The last movies will show at the Esquire Theater on the Gold Coast Thursday, after which its owner will start raising the curtain on a possible retail-hotel complex that would replace the theater once its 1930s-era building is demolished.

The residential and retail developer acquired the Oak Street property four years ago. Most recently, AMC Entertainment Inc. has been managing the theater, often showing films that already have run at downtown megaplexes.

Shapack expects to begin demolishing the Esquire in about 14 months and start construction on a mixed-use complex likely to include retail, restaurants and, perhaps, a hotel or condominiums.

For more, see the article in the Sept 14, 2006 edition by Susan Diesenhouse.

(Thanks to Adam Martin at Cinematour for providing the photo.)

Its the same old story – run a theatre down, forget to replace light bulbs and the community is glad to see a re-development!

Later they will miss the facility, but by then the developers will have had their profits and will have moved on.

A bit from YouTube on the closing of the Esquire.

It is truly a shame that this theatre is being closed, but I guess whoever owns the building figured they could make more money by turning it into a shopping center. I only visited this theatre once. It was in November of 1999 to see “The Suburbans”. As much as I enjoy the comfort creatures of the multiplex, there is nothing better seeing a movie in a smaller old school theatre. Hopefully somebody will re-open the McClurg Court and turn it into an art-house theatre.

Your right Longislandmovies. I wonder what will get the axe in September 07?