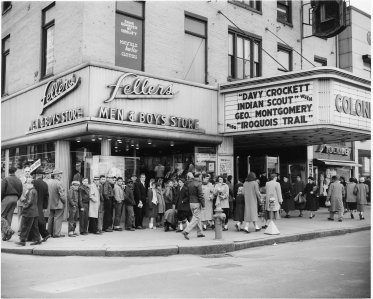 HARRISBURG, PA — I am Dennis O'Rear the son of John “Jack” O'Rear the manager of Harrisburg’s Colonial Theater from about 1934 until his death in 1957. I have some pleasant memories of the theater which I’d like to share. When I visited there I was called Jack’s son or Jack’s kid.

My dad was born in 1892 and after graduating from a military high school in Kentucky began a career as a theater manager. He left me an old scrap book of his that describes his career as a vaudeville and movie theater manager in the 1920’s and 1930’s. Many of the places and events here are obscure to me. Prior to coming to Harrisburg he worked in Allentown (Rialto), Bethlehem (Kurtz and Colonial), and Reading (Rajah) along with other locations and theaters.

My dad did not marry my mom until late in their lives. He was 58 and my mom was about 40 when I was born. My birth announcements said “Better Late Than Never”. I guess I can’t argue with this. While my dad spent many of his years as a bachelor, I suspect that he had a full life. A story about this was passed on by my mom. One day after the war they were walking down the streets of Allentown where my dad has spent many years as a bachelor. My dad spotted a group of sailors, and he quipped to my mom, “A lot of those boys look like me.” My mom was very understanding.

But for me, some of the best times were running around the theater while my dad worked. The office was on the second floor accessed by stairs to the left of the lobby. My dad had a small desk. One time they let me put letters on the marquee — they were huge to my small hands and sharp. I think I managed to spell out my name.

The projectionist (Ike Davis I believe) let me switch the projectors at the right time. We would watch for the dots at the top of the film and he would get me ready to switch on the projector. Great fun. Understandably, one of my favorite films is now Cinema Paradiso. When ever I hear Ennio Morricone’s theme to this movie, I melt.

My most memorable film was the 1955 re-release of The Wizard of Oz – I was four years old. I remember sitting with my mom on the right hand side near to the front. When I sat in the velour seats I had to be careful. If I sat too far back, the seat would fold up and I would have my knees jammed around my ears as I slid down to the floor. I had to sit on the edge of the seat. At that age movies were real and I was in awe and afraid. As the movie continued I got so scared that I began to cry. I could not watch from the seat — I had to stand and peer at the movie between the crack of the seats in front of me only using one eye. When the flying monkeys came down to attack Dorothy, it was too much — my mom had to take me out of the theater.

Theaters were very different parts of the community in the 1950’s. The Colonial was in the heart of a vibrant downtown. During the evenings, my dad would be out front greeting the patrons. He would also arrange for visiting actors and actresses to stop by. At home I have a copy of Knock on Any Door autographed by Humphrey Bogart.

But one striking difference between then and now is the extent to which a theater manager would promote their films and be involved in the community in general. Here are a few promotional pictures.

In particular I remember the hype over Davy Crockett. I had a coon-skin cap as a kid, and a stereo viewer of scenes from the movie along with the Alamo. Looking at the line of people waiting to go into the theater, I also remember going to Feller’s store for men and boys with my mom. I hated buying clothes. I still don’t enjoy this but fortunately my wife has excellent taste and buys all my clothes for me. Some things never change.

After my dad died in 1957, I was still recognized for years at the Colonial Theater and others in the downtown. One day in high school about ten years after my dad died, I was walking down the street in front of the Colonial and I ran into a school friend, Steve Metz. The Colonial was playing The Incredible Mr. Limpet with Don Knox. I asked if he wanted to see the show. He said sure, and was amazed that they recognized me and we got in for free.

The Colonial was not the only theater that I enjoyed. My childhood chums Dickie and Phil and I would walk down to the Paxtang theater on Saturdays and see matinees. The Colonial was primarily a theater for adults while the Paxtang theater was for kids. When you were seated, you had to be careful that your hand did not stray underneath your seat. For there was wads of old gum, kid snot, and other things that cannot be described. Before the movie started the theater manager would come on stage and talk about the movie and the one next week. He was a real bore and we couldn’t wait until the show started. The audience was all kids and was a riot of noise. The projector at the Paxtang was old and would often jam. When this happened the film would freeze in the projector and everyone would gasp as the film melted and the scene on the screen became a gooey mess. The lights would come on, and all the kids would begin to stomp their feet and clap – Movie! Movie! Movie! It was great fun and I got to appreciate Science Fiction and other movie themes. Some of the movies we saw were: War of the Worlds, Invaders from Mars (with the frightening scenes of the spaceship in the sand pit), The Angry Red Planet, Invasion of the Body Snatchers, Kronos, Zots!, and When Comedy was King. After the movie, Dickie, Phil and I would scavenge the ditches and creeks near the theater for discarded soda bottles. We could redeem them for two cents, and when we had about five or so, we could buy a new soda at the neighborhood gas station.

But today things have changed. We no longer have downtown movie theaters to anchor our communities. Too often we have elected to choose convenience in our personal lives not recognizing how this destroys our sense of community.

We have chosen the convenience of cars and moved to the isolation of the suburbs leaving behind inner cities that can’t sustain themselves.

We have chosen the convenience of air conditioning and moved inside our houses on hot evenings and we no longer share the quiet times with our neighbors on the streets.

We have chosen the convenience of DVD’s and Movies on Demand to watch in our homes and no longer share the community created by downtown theaters or the simple joy of sharing Saturday matinees with friends.

Whenever I get the chance, I stop in one of the few remaining classic or art theaters near my home. But they are fading away and soon the joys of Saturday matinees will only be a memory shared by a few older people. The past can’t be re-created and we must adapt and move on. Nostalgia is like a dessert wine – it helps us complete a good meal. But when drunk in excess is cloyingly sweet. Nostalgia is best when it closes old stories and moves us to the future.

So now I know what I’ll do. In my town of Petaluma California, there is a classic candy shop that sells Goobers, Mary Janes, Raisinettes, Jujubees, Red Vines and other candy treats. I’ll buy a big bag. Then I’ll rent a copy of The Wizard of Oz and finally see what happened after the flying monkeys attack Dorothy. At last I think I’m ready for it. 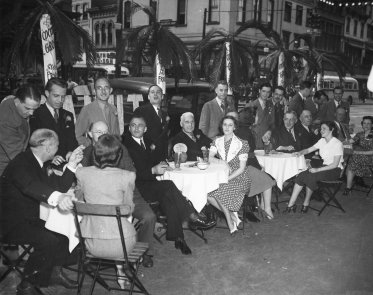 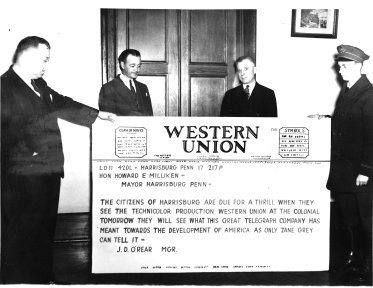 Wonderful memories. Thank you for sharing them.

Dennis: This is so weird. I had literally just put the finishing touches on my own memories of the Colonial and its unfortunate demise, which I was going to add to Cinema Treasures, when I logged-in and saw your post. You and I are just about the same age and I not only attended the Colonial and the other downtown Harrisburg theaters in the 50s and 60s, I grew up in Paxtang and went to that little bijou just about every week, usually on Saturday afternoon or Friday night. We were probably in the same audience together many many times. You obviously remember the Paxtang’s impressario, Samuel “Doc” Gladsden (originally Goldstein), although I recall him as a more colorful character than you do. I’d just been having an e-mail exchange with another CT member about that very subject. What a small world. Glad to see a photo of the Colonial. If you have any others of the Colonial or State, please post them.

Dennis,thanks for sharing your memories.It was well written. Appreciation also goes to John for posting it.

Other pictures of the Colonial are at the following site – the article had to be trimmed a bit. I have also written other memory stories.

Scroll the right screen down to the bottom.

What a great article!

Dennis,
This is a great article. I remember the Colonial Theater very well, as well as the Senate Theater and the State Theater (where I had my first date—I don’t remember the movie, I was too preoccupied—with my thoughts!—but it was some Shakespeare I believe).
The neighborhood theater I went to most often was the Pennway on State State, where my mother would drop my brother and I off for the Saturday double features (she’d then take the day off)…including, I recall, the original Godzilla…
I remember Feller’s too, that and Mary Sach’s and Bowman’s and Pomeroy’s…all places my mom took me for clothes…
As you know, my dad died in 1957 also (October)—

This is a great photo before the decline of the old Colonial. Very nice to see it that way again.
I have some photos taken after the Colonial collapsed. I also have a photo, circa 1910, of the original building, the Lochiel Hotel at 3rd & Market before the Colonial was added to it. The building was pretty much restored to its original state after the collapse.
I remember seeing “The Day the Earth Stood Still” at the Colonial.

BTW It was the Penway, a neighborhood theater on State St. (17th & State?) I grew up about a block away from it on Liberty St.
Downtown there was also Loew’s Regent, the MGM flagship theater, on Market St. across from the railroad station. And the Rio on Walnut St. across from Capitol Park. All the vintage Harrisburg theaters now long gone.
I’m now also living in California.