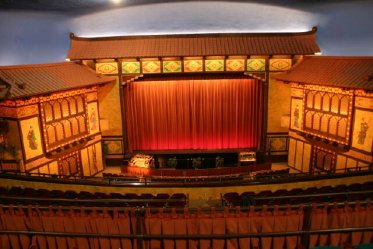 The Motor city chapter of the American Theatre Organ Society is proud to celebrate the 80th anniversary of the Redford theatre, the chapter’s home since 1974. The evening will highlight the theatre’s original Barton theatre pipe organ with Detroit’s John Lauter at the console. John will play solo selections from the nine decades the theatre has been entertaining Detroiters and will accompany the silent film “The Electric House" starring Buster Keaton.

Also featured on the program will be the Hotel Savarine Society orchestra, an eleven-member group that recreates the dance band sound of the 1920’s. The orchestra has been performing before metropolitan Detroit audiences for over 20 years. The Hotel Savarine Society Orchestra borrowed its name from a well-known hotel on Detroit’s lower east side. The hotel opened in 1927. The hotel is just a memory, but the music of the 1920’s lives on through the band’s performances.The Orchestra will be joined by the Pleasant Moments Vintage Dancers. This group performs throughout the region specializing in the dance styles of the 20s and 30s. Watch for classics such as the Charleston and other favorite routines.

The musical portion of the evening will conclude with the orchestra, John at the Barton, and the dancers on stage in an exciting and rousing finale. Following the show, be sure to enjoy a special reception in the lobby open to all members and patrons.

The Motor City Theatre Organ Society purchased the Redford theatre in 1977 from Community Theatres to preserve the Barton organ in its original home, and to provide the group with a home theatre. The Chapter is in its 30th year of presenting bi-weekly classic films on the large screen at the Redford. The Barton organ is presented before each film and at intermission. The group replaced all of the main floor seats and a portion of the balcony seats in 2002-‘03, taking the opportunity to perform much restoration work returning the auditorium to its original 1928 Japanese splendor. Most recently the outer lobby was returned to its 1928 appearance—something Detroit theatre goes have not seen since the 1950 remodeling. An informative set of pictures detailing the seat project can be seen here.

More information can be found at the Redford Site.

(Thanks to John Lauter for providing the photo.)

Such a beautiful photo on the Cinema Treasures homepage!

I have watched this project evolve for over twenty years and still attend whenever I’m in the Detroit area. It keeps getting better all the time. Congratulations!

Bump up to top.

The show is upon us! Come to Detroit to see what really made the 20s roar!