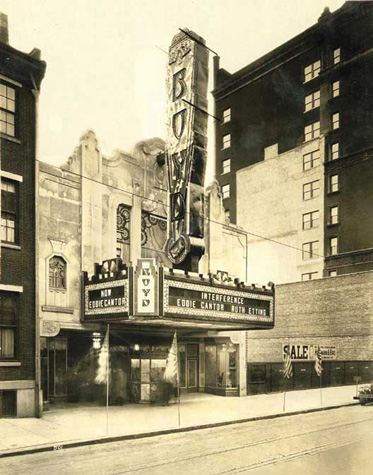 PHILADELPHIA, PA — A rally is scheduled for today at 11:30 AM in front of the Boyd Theatre, located at 1908 Chestnut. Everyone is urged to attend and show their support. According to Friends of the Boyd:

Most important will be your joining our rally!

Thanks to Howard Haas for the information.[pre][/pre]

I’m happy to report from Philadelphia that the rally to save the Boyd May 22, 2008 got an enormous turnout as well as very good media coverage all around. But given the current state of politics great caution must be used in being too smug about that, as the Boyd’s future is up against foes who are not phased by such things in the least. According to the Fox news report that aired in Philadelphia, many believe the sizeable Kimmel Center — an enormous live performance venue located not far from the Boyd — and which is heavily connected with Pennsylvania’s current Governor Ed Rendell, is pushing very hard to get the Boyd demolished to eliminate any possible competition from it. I don’t know if there’s any truth to that or not, while the Kimmel Center spokespeople fully deny it.

I have argued for a long time though that if the Boyd were to seek to be other than a movie palace — which is the one thing that Philadelphia does not have at all right now — it would come into steep competition with all of Philadelphia’s many live performance venues at the present time, not just the Kimmel, but also the all new Suzanne Roberts Theatre, the Academy of Music, the Merriam Theater, the Wachovia Center, the Tower Theater and so forth and so on. On the other hand, if it were to distinguish itself from these live performance venues by strictly returning to being a world class movie palace, that is, a place where ONLY movies are presented, it would target an audience other than that which the live performance venues so heavily rely on.

Add to this that to date Philadelphia has no digital cinema theaters at all, while I’ve been arguing for the longest time now that the Boyd should be the first to go this direction, and in the Boyd’s case, one that combines digital cinema technology with Cinerama.

But that said, I don’t think that anybody could fault me for saying that Philadelphia is under the governance of some of the worst politicians in the world right now. And that, sadly, is an unavoidable factor here in Philadelphia right now. And one which those wanting to save the Boyd cannot overlook. In the truest sense, as reluctant as I am to say it, we are at war. For certainly it’s war when all elections are rigged, and “law” is only the mindless whims and prejudices of those who govern and whatever great forces of evil who obviously are behind them.

In light of that, God save the Boyd!