Varsity Theatre to get second screen 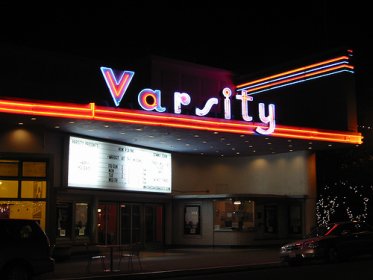 DAVIS, CA — The Varsity Theatre, with financial assistance of the city, will be adding a second screen and other improvements to help keep it viable in the age of the multiplex. Currently it is one of the dwindling number of single screen theaters in the country. (Note: the article says the theater is 88 old; it actually is only 59 years old. The was an earlier Varsity Theater in Davis that was closed and demolished right before the current one was constructed).

The city is spending nearly $1 million to fund the addition of a second screen with 100 seats next month, and adding digital projection. Operators of single-screen theaters are trying everything they can to keep their theaters alive — asking for support from city coffers, adding coffeehouses and restaurants, and switching between live events and film programming, to name a few.

The city support comes as a relief to Varsity leaseholders Jon Fenske and Sinisa Novakovic, who’ve operated the streamline moderne 333-seat facility as an arthouse for the past three and a half years in the university town.

(Thanks to Marilyn M for providing the photo.)