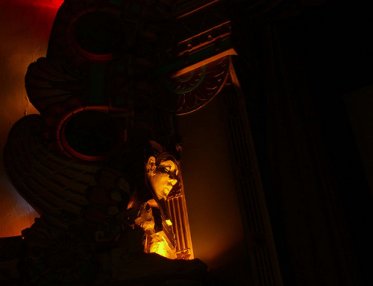 OAKLAND, CA — The 1926 Parkway Theatre closed this past weekend.

But the best part, patrons say, was not just the $5 tickets for shows – it was that that the Parkway served beer, wine and pizza, which the staff delivered to your seat during the movie. And the seats were couches and lounge chairs, each accompanied by a coffee table perfect for resting one’s feet.

(Thanks to marymactavish for providing the photo.)

I used to run a rep house called the Roxy in Toronto, and it makes me really sad to read about the closing of the Parkway. It sounds like it was a great place to go to share ones love of movies with good friends.

Back in the mid 1990’s, I used to see a few good flicks there. The balcony had been enclosed for a church but seating downstairs was comfortable with good projection.
I liked the curved stage proscenium arch; it is in the Egyptian mode. My photos reveal the heads of famous farohs all illuminated with concealed colored rear lighting.
Two things I’m not too sure about… Were there curtains in use and was there a roof sign? Can anyone please enlighten me?

To answer Simon’s question:
There were curtains, but I do not remember seeing them operate during the 1990s or after, when I went there. As for the roof sign, yes, there is one. It is double-sided, and consists of metal channel letters virtually identical to those on the more famous rooftop sign of the nearby Grand Lake Theatre. The Parkway’s letters were originally all lightbulb, but at some point were redone with single-tube green neon. It has been a habit for me to look over toward the Parkway from the 880 freeway at night to see the lit rooftop sign. I did so a week ago and it was still completely lit, despite all the rain we’ve recently had. In fact, it was my seeing that sign from the freeway in the 1990s which first alerted me to the fact that the Parkway had reopened. I began attending occasionally with Oakland friends. My last time in there was last Summer, when leading the Theatre Historical Society Conclave tour. As Egyptian architecture is a specialty of mine, I was able to speak to the detailing of the proscenium as well as the general history of the theatre.

Even though I don’t reside in Oakland, CA, or on the West Coast generally, it’s very unsettling to read/hear of a revered movie theatre that brought so many people together and showed so many different kinds of films closing.

Sad to say, but just another sign of the times.

Gary… Many thanks for the very interesting “facts” especially about the roof sign. This will be added to my personal archives and photographs.
And, yes, Oakland’s awesome Grand Lake Cinema(s) are a real gem!