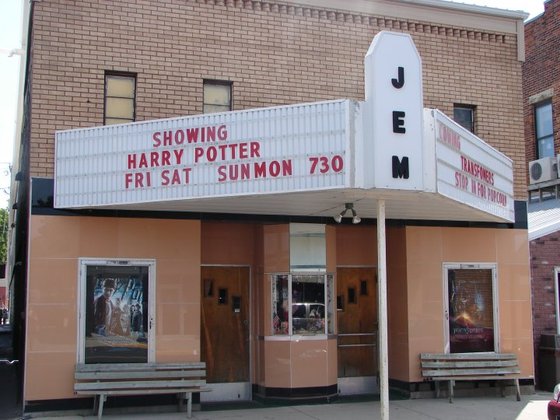 HARMONY, MN — With theaters nationwide forced to switch over to digital, it seems like the small neighborhood theaters are getting hit the hardest. While the owners of the Jem Theatre are determined to do what it takes to convert, it’s going to be an uphill battle.

Read the full story at KAAL.

I fear this will be common, I live in Buffalo which is a market that has seen a few digital conversion (only one multiplex I believe is 100% digital in the market), and I’m wondering what will happen if the actual “drop dead date” for film of 2012-2013 actually does happen. I’m guessing the stream will slowly trickle down to nothing as smaller wide releases (say in the 400-1500 screens range) may simply stop being offered to theaters on film, until major releases and art films are also only available by hard drive.

We see it now with major chains careful about converting their higher profit locations and markets while taking a wait and see approach to the others. 70,000 though sounds steep, and there are different business models including Virtual Print Fees they might be able to take advantage of. I hate the idea of people having to travel an hour or more just to see a film, any film.

Although some small town theaters have jumped they gun and gone digital, it’ll be a battle for theaters on the bubble in very small markets.

The industry has to rethink this whole thing. All of these smaller town cinemas have Xenon light sources with a film projector attached to them. Why can’t one of the projector manufacturers come up with a digital imager that can be fitted onto the existing lamps? Without this alternative many cinemas will close leaving many areas without a movie theatre. Without such a facility movie fans will have to travel miles to see the latest releases or wait to watch them on DVD or Pay TV. What’s the difference between what we think of as a movie or a feature length photoplay produced for TV exhibition? It’s the same thing isn’t it? But wait… show it to an audience on a big screen in a cinema and it turns into a motion picture – an event!

KAAl and John and Jon all make good points.Progress.So it goes.