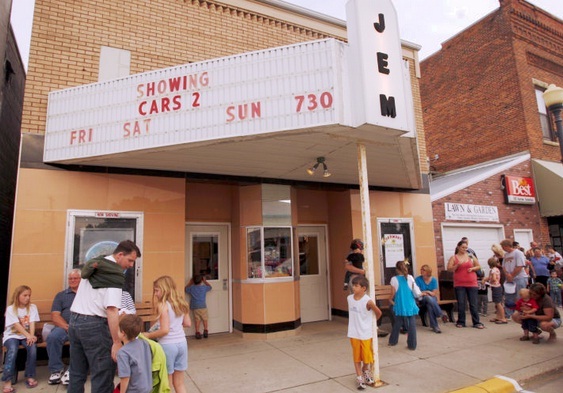 The Jem Theatre is the only movie house in Fillmore County, Minnesota. It opened in September 1940, replacing an earlier adjacent New Jem Theatre which was damaged by fire in April 1940. In 1943 it was converted into a bowling alley which closed in 1947. It remained vacant until 1961 when it reopened as a movie theatre. It continues to draw crowds from the surrounding communities.

The second JEM Theatre didn’t operate for long after opening in September, 1940, to replace the first JEM next door which had been ruined by a fire in April. In 1943 the new house was converted into a bowling alley, which closed in 1947. The building remained vacant for fourteen years, until it was restored for theatrical use in 1961. The JEM has managed to remain in operation since then, converting to digital projection in 2011.