Hitchcock films come alive on the big screen at the Lindo 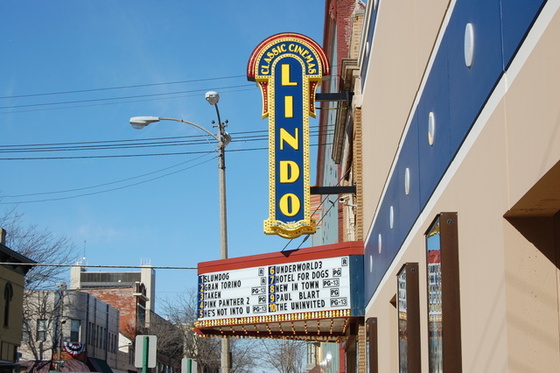 FREEPORT, IL — The Lindo Theatre is thrilled to announce its next classic film series! Beginning on January 11, 2012, the Lindo will feature films from the suspense and psychological thrill master Alfred Hitchcock himself during its Hitchcock Suspense/Thriller Film Series! All show times are at 1 and 7 PM on select Wednesdays at the Lindo Theatre, located at 115 S. Chicago Avenue in downtown Freeport. Co-sponsored by Highland Community College and Stephenson County Historical Society, admission to the Hitchcock Suspense/Thriller Film Series is $20 for the entire series or $5 per movie. Tickets are available at the Lindo box office. The series will kick off on January 11th with “Shadow of a Doubt” (1943), starring Teresa Wright, Joseph Cotton and MacDonald Carey.

No list of suspense or thriller films can be complete without mention of Filmmaker/Director Alfred Hitchcock, who helped shape the thriller genre, beginning with his earlier silent films in the late 1920s. Lindo’s Hitchcock Suspense/Thriller Film Series will bring these classics to the big screen: “Shadow of a Doubt,” “Spellbound,” “Rear Window,” and “North by Northwest.” “We have received a great response from our patrons for our classic film series, and we are very excited to bring it back to the Lindo in 2012,” explains Shirley Johnson, an owner of Classic Cinemas.

As an added bonus for those who purchase tickets to the entire series, the Lindo Theatre will offer complimentary admission to the 1937 musical romance “Maytime” on April 25, 2012.

January 11: “Shadow of a Doubt” (1943) Charlotte ‘Charlie’ Newton (Teresa Wright) is bored by her quiet life at home with her parents and her younger sister. She wishes something exciting would happen and knows exactly what they need: a visit from her sophisticated and much traveled uncle Charlie Oakley (Joseph Cotton), her mother’s younger brother. Uncle Charlie creates quite a stir and charms the ladies club as well as the president of the bank where his brother-in-law works. Young Charlie begins to notice some odd behavior on his part, however. When two strangers appear asking questions about him, she begins to have concerns. Starring: Teresa Wright, Joseph Cotton and MacDonald Carey

As Alfred Hitchcock’s classic psychothriller opens, the staff of a posh mental asylum eagerly await the arrival of the new director. When the man in question shows up, it turns out to be handsome psychiatrist John Ballantine (Gregory Peck). But something’s wrong, here: Ballantine seems much too young for so important a position, his answers to the staff’s questions are vague and detached, and he seems unusually distressed by the parallel marks, left by a fork, on a white tablecloth. Dr. Constance Peterson (Ingrid Bergman) comes to the conclusion that Ballantine is not the new director, but a profoundly disturbed amnesiac and, possibly, the murderer of the real director. But is she correct in her inferences? Director Hitchcock tapped surrealist artist Salvador Dali to design visually arresting dream sequences in the film. Starring: Ingrid Bergman, Gregory Peck and Rhonda Fleming

Professional photographer L.B. “Jeff” Jeffries (James Stewart) breaks his leg while getting an action shot at an auto race. Confined to his New York apartment, he spends his time looking out his rear window observing the neighbors. He begins to suspect that a man across the courtyard may have murdered his wife. Jeff enlists the help of his high society fashion-consultant girlfriend Lisa Freemont (Grace Kelly) and his visiting nurse Stella to investigate. Starring: James Stewart, Grace Kelly and Wendell Corey

Roger O. Thornhill (Cary Grant), a suave, successful New York advertising executive finds himself, through a case of mistaken identity, embroiled in a web of intrigue and murder. He travels across the country to prove his innocence to the police and get an evil crime syndicate, looking for a lost microfilm, off his tail. Starring: Cary Grant, Eva Marie Saint and James Mason

PLUS, A SERIES BONUS:

April 25: “Maytime” (1937) An elderly Miss Morrison recounts her life as the once young and beautiful opera singer Marcia Morney-then the toast of Napoleon III’s Paris. One evening, she encounters an American voice student, Paul Allison, and the two unexpectedly fall in love. Unfortunately for her, she has already accepted the marriage proposal of her mentor, Nicolai Nazaroff-more out of obligation than any feeling of love for him. As a result, she breaks off her relationship with Paul, and reluctantly marries Nicolai. Seven years later in the U.S., Nicolai engages Paul for a performance of “Tsaritsa” with Marcia not knowing of their past. When he realizes what he has done, Nicolai becomes enraged with jealousy. Starring: Nelson Eddy, Jeanette MacDonald and John Barrymore, Directed by: Robert Z. Leonard

The series of Hitchcock Suspense/Thrillers, has been selected with the assistance of Ed Finch, executive director for the Freeport Historical Museum, and Alan Wenzel, the Speech and Communications instructor for Highland Community College. There will be a brief introduction before each movie and a discussion led by Ed Finch and Alan Wenzel following the movie. Movie-goers are encouraged to stay after the movie to participate in this exchange.

Established in 1978 and based in Downers Grove, Classic Cinemas is a family-owned company operated by Willis, Shirley and Chris Johnson. Classic Cinemas today operates 13 theatres with 100 screens in 12 communities in Northern Illinois and the greater Chicago area. For more information on Classic Cinemas, please visit their website at www.classiccinemas.com.