Camera Night at the Ivar 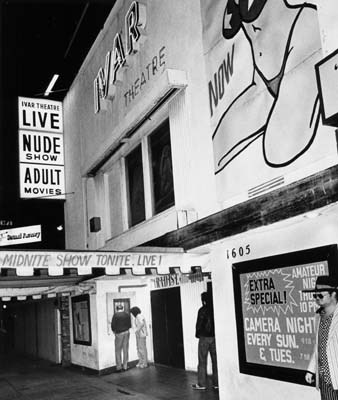 Camera Night at the Ivar a group show

“It’s cold out there, colder than a ticket taker’s smile at the Ivar Theatre, on Saturday night” Tom Waits – Nighthawks at the Diner

The Ivar Theatre in Hollywood has inspired lyrics in the songs of Tom Waits. Photographer Garry Winogrand’s images of Ivar strippers have been displayed at the Metropolitan Museum of Art. Performers through the years have included Lord Buckley, Lenny Bruce and many others. Elvis made a movie there. The Ivar started life as a legitimate performance theater when it first opened in 1951. It later became a rock club; The Grateful Dead played there in 1966. The theatre changed hands frequently and by the late 60’s it became a full-nudity strip joint – one of the last standing “Burlesk” houses in the United States.

The Ivar was lewd and notorious in its day. It was described by its patrons as “a chamber of desperation, a mausoleum for souls — on and off the runway.” Ross MacLean, one time stage manager and spotlight operator for two years, says “It’s difficult to convey how bizarrely un-sexy and un-romantic the place was. A lot of the girls just danced around in street clothes, and took them off with about as much charm as someone undressing in a locker room.”

Sunday and Tuesday evenings were camera nights, where for the cover charge the customers could take as many pictures as they liked. If a customer put a dollar on the catwalk, the performer would give him an up-close and very personal view of her body.

At the time the club drew many, now-notable photographers including Winogrand (who according to historian John Szarkowski, shot 150 rolls of film there), Bill Dane, Paul McDonough and Anthony Friedkin to name a few. drkrm, was drawn to curating this exhibit for many reasons. It was a time when these artists were somewhat known but not on the level they are now and they were all part of a greater circle in New York City that also included Diane Arbus, Lee Friedlander and Tod Papageorge. Some of them were good friends and used to shoot together, even following each other out to California.

On another level, what’s intriguing is allowing photographs to be taken inside the club, it gives us an incredible look at an audience of voyeurs, normally protected by the cover of darkness. In that split second of the camera’s flash, we can see the men in the audience, their facial expressions, how they’re sitting, where they’re looking or not looking. The late LA artist Mike Kelly decribed the behavior of the Ivar’s male audience members, “as if drugged in a dentist’s chair, the men sit frozen and immobile. There is no show of emotion, no hooping, hollering or wild applause. Seances are livelier.” This exhibit is as much about the relationship between the women on stage and the men in the audience as is it is about the actual image and the photographers who took them.

drkrm is an exhibition space dedicated to the display of popular cultural images, fine art photography, documentary and photo journalism, cutting edge and alternative photographic processes. drkrm is located at 727 S. Spring Street in the Gallery Row district of Downtown Los Angeles. Regular hours are Wednesday-Saturday 12-6, Sunday 12-4 and by appointment.