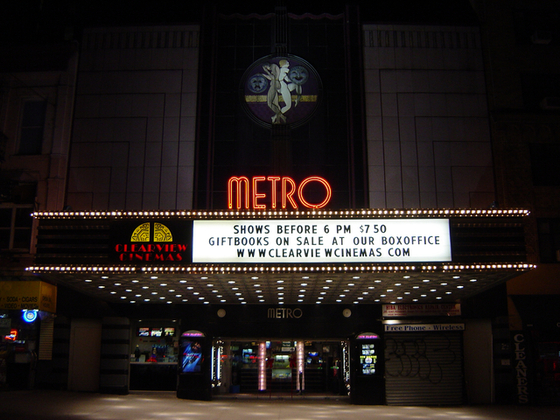 NEW YORK, NY — The anticipated Alamo Drafthouse planned for the former Metro Theater is no longer on the slate. Since announcing plans in April 2012 Alamo cites a major rise in construction costs as the source of its demise. It would have been the chain’s first Manhattan location.

(Thanks to Patrick Crowley for providing the photo.)

I agree. Maybe they’ll make one in new jersey. If amc’s lease in rockaway expires, then alamo drafthouse will come in lol…

It does suck (although I would have likely been more apt to travel to Yonkers than the New Metro, all things being equal).

I was at Yonkers opening night and briefly suggested to Tim League they look into Headquarters Plaza in Morristown – which I think would have been an ideal spot (AMC is moving back with those great luxury recliners – which is pretty great news as well).

I’m hoping they’re behind the new Paramus Park 13 but suspect not as Alamo’s largest complexes have 10-screens each. Paramus Park would make sense as a more civilized alternative to GSP, which really should have been a 20+ screen theater (it, along with Clifton Commons and Rockaway is constantly packed…even on weeknights).

It’s worth noting iPic is planning a luxury cinema in Fort Lee, they seem like the kind of theater that might take over this project if the developers still really want a theater. And with their ticket prices ($35 in some markets verses Alamo’s modest $12 in Yonkers) the numbers might make sense for them.

Scrapping the plans for an Alamo Drafthouse Cinema on Manhattan’s West Side:

That’s too bad. Although I don’t reside in NY at all, I was sort of hoping that the plan would go through, and that maybe it would pave the way for a possibility for an Alamo Drafthouse Cinema here in the Boston area. I like their zero-tolerance policy regarding texting/cell phone use in the movie theatre during the movie(s). We could use some of that in theatres here!