New York, NY - “Mr. Apollo” Has All the Stories About the Historic Theater in Harlem 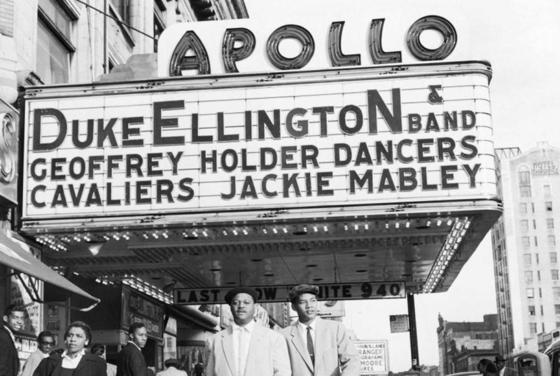 From WRTI.org: Since it opened its doors in 1913, the Apollo Theater has survived a series of iterations, closures, renovations, and shifts in direction. Its allure as a venue for jazz began in the 1930s with the debut of Jazz a la Carte, a show with an all-black cast.

Soon after, the famous talent contest Amateur Night took off, with Ella Fitzgerald as an early winner on November 21, 1934. She was just 17.

He sought relief in the shade near a stage door of the theater on 125th Street. Then the owner spotted him.

The man who first opened the door for Apollo historian and tour guide Billy Mitchell was Frank Schiffman. Starting in the ‘30s, Schiffman played a key role in transforming the theater from its first life as an all-white (performers and audience, alike) burlesque house, to the renowned venue for jazz and popular African American performers.

Billy Mitchell leads tours of the Apollo for hundreds of thousands of people who come to get closer to its remarkable past and present. He was recently in Philadelphia to speak at the University of Pennsylvania. WRTI’s Meridee Duddleston sat down with him at Penn to learn about his fascinating start, his take on amateur night, and his backstage experiences.

Radio script: A famous theater has a storied history and an ambassador all its own. His nickname is “Mr. Apollo.” WRTI’s Meridee Duddleston has more.

Meridee Duddleston: In the early 1960s, Billy Mitchell was a teenager living in the Bronx. He went to Harlem one hot summer day to borrow money from a relative. His family needed food. He hadn’t had anything to eat or drink, and his aunt wasn’t home. So he sought relief in the shade near a stage door of the theater on 125th Street. Then the owner spotted him. Billy Mitchell: He opened up the door and said ‘Hey kid, what are you doin’ back here?‘ I said, 'Mister, I’m not doing anything. I’m just waiting from my aunt to come home. She lives across the street.’ He says, ‘Oh yeah, well while you’re waiting, do you want to make some money?’

MD: Billy was cautious, so the man opened the door wide to the Apollo Theater backstage. It was alive with people. The owner explained what he had in mind.

BM: They’re rehearsing for a big show and they’re very busy. And they’re going to need somebody to go to the store to get their coffee, newspaper, shoes shine, clothes pressed and kid, if you run these errands they’ll give you a little tip.

MUSIC: Ella Fitzgerald, “Thanks for the Memory”

MD: The little tips were a bonanza of singles, fives, tens. Billy was invited back the next day, and then on weekends. And so began his long relationship with a theater so full of mystique, history, and opportunity that even headliners today often opt for the less fancy dressing rooms used by Ella, Billie Holiday, Louis Armstrong, and countless others.

And a 15-year-old eventually helped put food on the table, pay the rent, and started a life rich in the experiences and friends that last.

Link to the story, with audio link: http://wrti.org/post/mr-apollo-has-all-stories-about-historic-theater-harlem 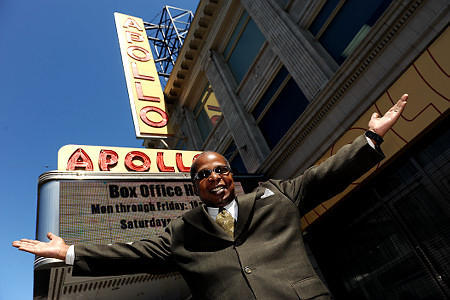 Hello CT: I remember this story. James Brown asked to see his report card and actually told him that he needed to improve his grades or he couldn’t hang out there anymore.