Jersey City, NJ - An Inside Look At The Stanley Theater’s Celestial Restoration 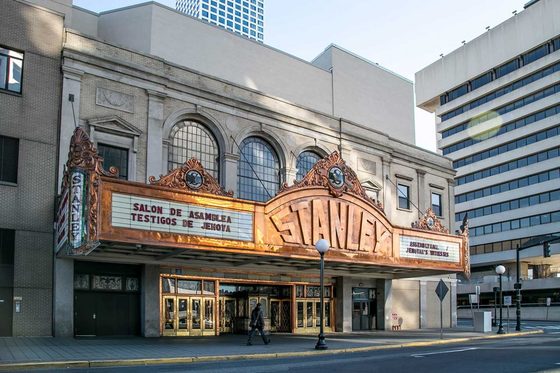 From Jersey Digs: When it opened in 1928, The Stanley Theater in Journal Square was one of the greatest old movie palaces and the second-largest on the East Coast, next to Radio City. Presenting both orchestral and stage shows plus Hollywood new releases, it quickly became a cultural hub in the bustling Journal Square neighborhood.

“This was a refuge for the people of Jersey City,” notes historian Richard Polton. Designed by architect Fred Wesley Wentworth in a grand Venetian theme, the theater continued to thrive into the 1960s, with entertainers ranging from The Three Stooges, Jimmy Durante, Tony Bennett, Janis Joplin and Dolly Parton, to The Grateful Dead. By the 1970s, however, the theater, like many of its kind, suffered from disrepair and became a grindhouse.

The spectacular elements of the space left to be forgotten, the intricate metalwork was painted over and the Wurlitzer organ removed before it shut down for good on April 20, 1978. But in 1983, the neglected theater was purchased for $1.8 million by the Watchtower Bible and Tract Society from Delaware Corporation, for use as an Assembly Hall for Jehovah’s Witnesses. The story of its renovation, an unfolding of willing hands and minds, transformed the once-entertainment hall into a sacred place of worship.

In 1988, the theater, which is on the NJ Registry of Historic Places, underwent an initial renovation phase, but the latest, completed in a nine-month period from 2012-2013, has restored even more value and splendor to the space. Situated in direct proximity to The Loews, the two exemplify the polar opposite results of restoration productivity, raising the question, once again, of funding for such a massive undertaking of a historic space.

“We are largely self-financed,” said Robert Warren, media consultant for the World Headquarters of Jehovah’s Witnesses, noting that the project was funded by individual donations from Witnesses across the world. “Whoever wants to build a tower must first count the cost,” he cited biblically, attributing the successful funding to strategic planning. “Rather than start and escalate, we evaluate first.”

Over two thousand Witness volunteers from across the United States worked together on the large scale project, with work completed through volunteers only with the exception of contractors for only high-risk safety needs. Pooling from various skill-sets, training often occurred from Witness to Witness. “We are largely self-financed,” said Robert Warren, media consultant for the World Headquarters of Jehovah’s Witnesses, noting that the project was funded by individual donations from Witnesses across the world. “Whoever wants to build a tower must first count the cost,” he cited biblically, attributing the successful funding to strategic planning. “Rather than start and escalate, we evaluate first.”

Over two thousand Witness volunteers from across the United States worked together on the large scale project, with work completed through volunteers only with the exception of contractors for only high-risk safety needs. Pooling from various skill-sets, training often occurred from Witness to Witness.

“It was wonderful to see the willing spirit of them,” said Chris Simonson, Operations Manager. Simonson noted that one volunteer from Italy knowledgeable on precious metals restoration was vital to revive the copper and brass finishes that had been painted over in thick layers.

The team also found objects that were there already, but tucked away. “A lot of small storage rooms were boarded up,” Simonson said. “We found areas people hadn’t been in for years and 30-year-old chandeliers in boxes, which were in good condition, but dirty. We discovered copper scrollwork on the side of the building, under paint, which we thought was woodwork at first.”

In peeling away layers, the team was able to preserve elegance but infuse it with comfort. For example, in refurbishing the seating, the group kept in mind that people would be seated for longer periods during congregation meetings than originally, when the theater was used for entertainment. “We lost 600 seats but kept the beauty,” Simonsson said.

“We know it is a privilege and we consider it an honor to be here,” Simonsson added. The attention to preserving the original design is evident from the facade to the stage itself. At the exterior entrance, a shiny copper marquee spans above a pair of solid brass doors, with arched windows above it.

“They really did build this to last,” added Warren.

The three-story lobby is fixed with columns, a center staircase with trompe l’oeil alabaster handrails and balusters, original gas lamps (since converted to lightbulbs), velvet drapes, and stained glass windows of faux “Chartre Blue” in the foyer. Biblical murals by Hungarian painter Willy Pogany originally adorned the ceiling and walls and were completed in the 1988 renovation. Another focal point of the lobby is the thirteen-foot crystal chandelier suspended from the second floor. Sourced from New York’s Waldorf-Astoria Hotel in the 1920s, it dates to circa 1890, and is illuminated by 144 bulbs that reflect onto 4,500 hanging crystal teardrops. The fixture is maintained with twice-yearly cleaning. A direct gaze up at it reveals its snowflake shape. On the floor beneath it, is the original compass chiseled by hand, whose tiles were chipped out and placed back in, during the renovation.

The theater itself, seating over 3,000, features an outdoor courtyard theme of grottoes, arches and columns and a proscenium arch modeled after the Rialto Bridge. Sourced materials include marble from Italy, Texas and Vermont, limestone from Indiana, and granite from Maine to face the Corinthian columns. On the sides of the theater, functional, original antiquated lion head fountains date to the 1920s and the “exit” signs were kept and restored. The copper overlay on the doors were polished by hand to bring back gloss, the ticket booth ceiling is original, and the grand staircase in the lobby was modeled after the Vanderbilt Mansion in Newport, RI. “We automatically assign a sacredness to the building because of our worship,” said Warren, of Witness Assembly Halls. “Having this space adds to the grandeur of why we are here.”

Indeed the religious group has utilized the space for its unique needs. Events are held in 13 languages and The Stanley is a worldwide destination, hosting a meeting with 44 countries in October. The fine acoustics are a plus for the music-heavy congregations, and beneath the stage, where the orchestra pit once was, is a Baptism pool.

The expansive, domed, white plaster, eighty-five-foot ceiling once permitted an open sky effect with a “stars and moving clouds” show that was created by a projecting device—the “Brenkert Brenograph.” Some of the points of light in the ceiling still work today, creating a twinkle-star-like effect, invoking congregation members to feel they are gazing up at Heaven itself. 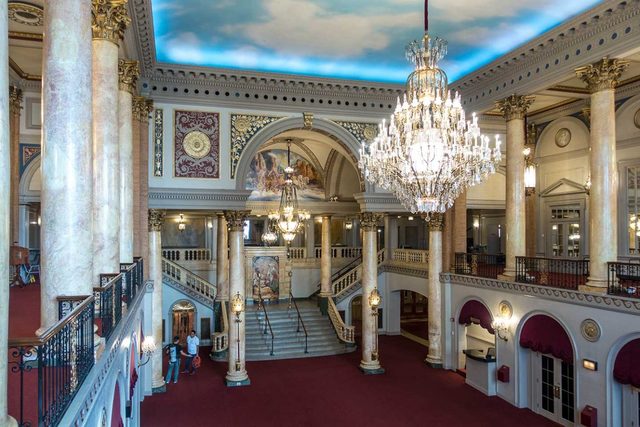 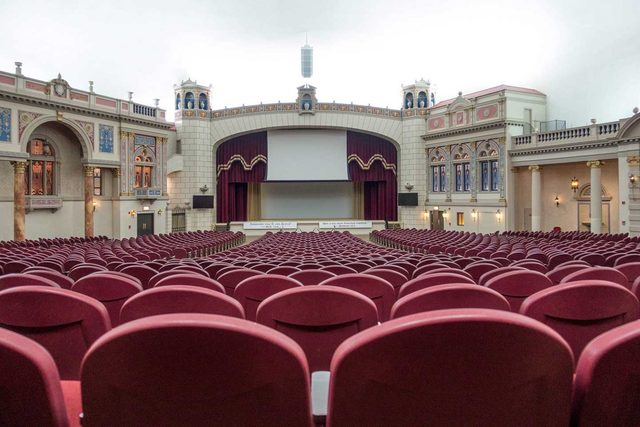 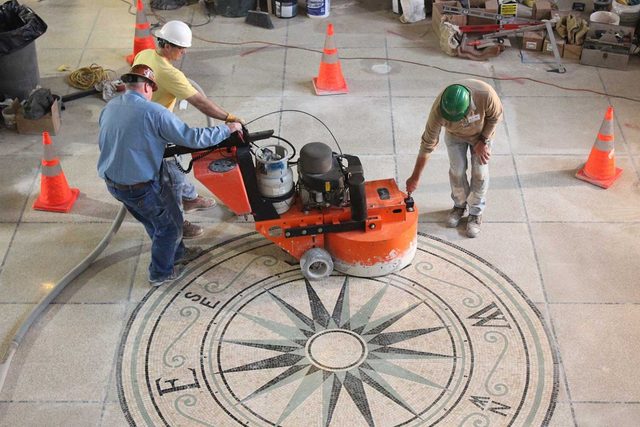 When the Stanley opened in 1928 there was no Radio City (Music Hall)!

I love Jehovah’s witnesses as they respect their buildings….any old movie theaters that I have visited now under their control are in immaculate condition…I just wish they’d program 35mm movies…which must look amazing.