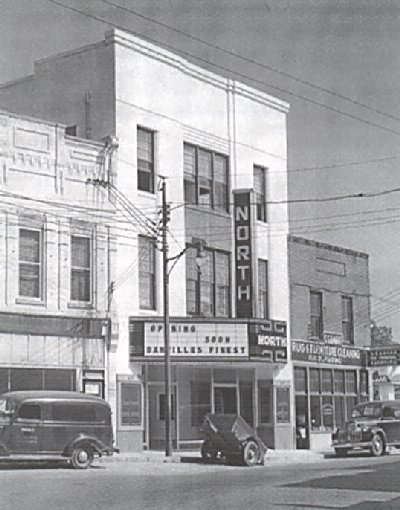 The Historic North Theatre Performing Arts Center is a beautifully restored facility presenting all types of theatrical productions. The North Theatre originally opened in August 1947 as Danville, Virginia’s finest movie and vaudeville house, with a seating capacity of 608. Unfortunately for the owner, Mr. Leonard Lea, TV hit about the time of opening and he never had a vaudeville performance. The theatre remained open until mid-1976. After that time it was an auction house, a number of different churches, and, finally from 1990 to 2003, Carolyn’s House of Flowers.

Because of the visionary efforts to reopen the North Theatre by local leaders, in 2003 a group was formed who purchased the theatre, a former restaurant next door with residence on the second floor and a third building next to the restaurant, which had been a two-story residence. The president of the group was local philanthropist Roy Gignac who was also a major donor. All told, over 3.5 million dollars was spent on the purchase and restoration of the complex which opened on February 25, 2005. The stage, originally 42 feet wide by 18 feet deep was enlarged to 42 feet wide by 38 feet deep. They had many wonderful productions, but because of a limited marketing budget and such high restoration costs they closed in 2010.

In September of 2011, celebrity magician Wayne Alan, America’s Only World Champion Illusionist discovered the North Theatre on the web (on Cinema Treasures) and found it was closed. Despite being five hours from his home in Annapolis, MD, something told him to look into the situation. He researched ownership of the building and found it was ‘For Sale’. After a series of phone conversations and e-mails he would be spurred on to visit the theatre in person. On November 8, 2011 he called Mr Gignac and was told that an offer had been made for the property. He later found that the offer had been made just five minutes before his call. He knew he had to make a move. The next morning he drove the 5 hours to Danville from his home in Annapolis. He immediately fell in love with the facility and the town of Danville.

That night the 100 year old brick facade above the restaurant part of the complex, which had been leaning away from the building when he saw it earlier in the day, collapsed. The next morning he was told by the lady at the front desk of his hotel “The North Theatre exploded and collapsed last night”. Most prospective buyers would have walked away, but not Wayne Alan. When he drove over to the theatre, he discovered what he had expected. The wall did fall, but there was no other damage to the building. He also knew that the wall would have to be replaced, so gravity actually saved him thousands of dollars for demolition.

The new owner will be booking top celebrity touring concerts and shows to perform in this 500-seat theatre, which has 384 seats in the orchestra level and 116 in the balcony. In addition, Mr. Alan’s theatre touring show “Magic of the Masters-the World’s Most Famous Illusions” - a modern look at Magic’s Golden Oldies will appear there once a month. It is a family friendly show with a touch of Broadway, Las Vegas and Branson combined. This big stage magic show will be the North Theatre’s resident show (like Shear Madness at the Kennedy Center, which has been there for over 20 years), and will be presented on the second Saturday of each month. The theatre will also host a number of other productions, festivals and special events.

We will strive to live up to the North Theatre’s first advertisement in the 1947 newspaper “Visit Danville’s new and finest theatre for the best in entertainment”.

The North Theatre is absolutely awesome. Jerry Meadors and the other people involved with the project have done a great job and I have heard nothing but wondering things. It is nice to see North Main or Neapolis coming back to its' former glory. My family has a long standing history in that part of town and it has ment a lot to us to see good things happening in a part of town that most people have forgotten and neglected. I am looking forward to the first show and hope to attend many events at the North Theatre.

I was priviledged to attend both the opening of the Harrington Art Space at the North Theater on Feb. 24, 2005 and the opening event, the Heath Brothers Jazz Quintent on Feb. 25, 2005. The house was sold out. The music was hot. The audience was blown away.

The facility is magnificent with attention to the smallest detail.

It was a marvelous treat to stand on North Main Hill and see the marquee light up the street.

Many thanks to Jerry Meadors and the many other people who have contributed so much time, money and hard work to create such a wonderful place for everyone to enjoy.

Everyone should take advantage of this beautiful and historic theater and attend any of the upcoming events. You will not be disappointed.

As mentioned in Mr. J. Allen Turmer’s comments, The North Theatre officially opened on Friday evening February 25, 2005 with a performance by The Heath Brothers Jazz Quartet. On the previous night The Carrington Art Gallery, part of The North Theatre Complex, was formally opened with a posthumous exhibition by two Danville, VA Artist, Carson Davenport and Paul Bond. Mr. Davenport was chosen by First Lady Eleanor Roosevelt to have a painting hung in the White House during FDRâ€™s presidency. Mr. Davenport was also selected to do three paintings for US Post Offices under the auspices of the U.S. Treasury Department’s Section of Fine Arts in the late 1930â€™s. One is located in nearby Chatham, Virginiaâ€™s Post Office. A brief history of Mr. Davenport by Mr. Herman E. Melton, can be read at
View link . We thank family members of each artist and many other individuals and organizations for loaning the works of art for the first ever exhibit in the delightful new Carrington Art Gallery.

As president of The North Theatre, Inc., I was honored to make a welcoming address to the 488 attendees, a sold out house. Mr. Jerry Meadors, the Project Designer and Artistic/Managing Director of the theatre, introduced me. I was stunned and humbled by a long-standing ovation. The standing ovation should have been directed at Mr. Meadors. Every facet, every door knob, every lamp globe, every detail of this marvelous facility was authored by Mr. Jerry Meadors to match the theme and feeling of the 1947 period of the original North. In addition, all of the technological and comfort items for performers and attendees alike were of his vision. I would say I am properly labeled the philanthropist behind the project. Thatâ€™s an easy job. The real credit goes to my dear friend, Jerry Meadors.

It was our great pleasure to have in attendance at our first nighter Ms. Eileen B. Mason, Senior Deputy Chairman at the National Endowment for the Arts, NEA, and two other staffers, Ms. Chana Chase and Mr. Wayne S. Brown. Ms. Manson also spoke to the assembled audience and commented on the high quality of the facility. The NEA was co-host of the opening event as part of its Jazz Masters series. Other special attendees were Ms. Peggy Baggett, Chairman, Virginia Commission for the Arts, and Ms. Kathleen S. Kilpatrick, Director, (Virginia) State Historic Preservation Officer.

After show comments regarding the performers and audio quality of the facility were exceedingly gratifying.

Our next show will be 10 performances of True West, by American playwright Sam Sheppard, commencing on April 15, 2005. The box office can be reached at 434-792 2700. On line ticket sales are just around the corner as is our formal web site www.norththeatre.com

There was electricity in the air. Just ask anyone who was there. The moment I walked into the theatre I had goose bumps cover my arms. I knew that something big was happening. You could see it – you could feel it. This magnificent and stately theatre was about to get the respect it so long deserved. Anticipation flowed freely through the aisles and into every nook and cranny. While there was conversation in the seats prior to the performance it was more subdued than typical for a crowd that large – More respect given to this now living breathing work of art.

The Heath Brothers fit like a glove. They, like the theatre have been around for many years. While getting on in age themselves they brought life into the theatre. They brought depth and experience and life giving sounds. The theatre in turned shared this with all of us.

While I know it has taken many folks to bring the North back from the dead I must acknowledge the one who laid hands on it and said “rise up”.

Jerry Meadors had a vision – he had determination – he loves Danville and he made it happen.

Jerry… my children and their children and the generations of other families in this region will feel the impact of your commitment. Your work is truly appreciated. Sometimes it comes down to just to simple words.

I had the pleasure of attending the opening night of the North Theatre. All of my family was in attendance. I have heard tells of the old theatres of Danville, like the North, Lea, Dan, Rialto, Virginia, Bijou, Capitol, Schoolfield, Gaiety, Ritz, but you never really understand what it was like until you have the chance to experience it for yourself. My best wishes to Jerry Meadors and the Board of the North. I hope to attend many more shows. It is nice to see what someone can do when they are truely focused on a vision and the ideals behind historic preservation and restoration. It changes an entire community.

Great job on Sam Shepard’s “True West.” Congrats to Jerry Meadors, Denny & Bryan Kirkwood, and Nathan Bexton. I hope others will come and see the performance. As well, I hope that others from Hollywood will become interested in participating in events and productions at the North Theatre. Again great job guys.

Opening night for True West was almost everything I had hoped for. The play was a great choice for the first professional production at the theatre. The actors were superb. The lightening was extraorinary. The theatre itself seemed to welcome the dialogue between the actors. A breath of stale air could be felt rushing toward the exit-the last of the old making a bit more space for the new. The gala that followed was as promised, a faboulous evening of wonderful food, beverage and dancing.

What, you might ask was the one thing that was missing that I had hoped for. A sold out house. The crowd was not small, but each seat was longing to be filled for this exceptional production. Maybe next time. It will not take long for the word of what’s happening at the North Theatre to spread far and wide. Bravo! Bravo! Bravo!

Here is my picture from December 2010.

I worked at the North Theatre from 1960 to 1963, it was a lst run theatre showing the finest Hollywood could produce. Mr. L W Lea was a great manager and boss, he also ran the Lea Theatre downtown, and the Schoolfield Theatre located in the Schoolfield area, where I also worked when need.

The marquee of this theatre showed up prominently in a crime documentary aired yesterday on the ID cable channel. Very brightly lit at night.