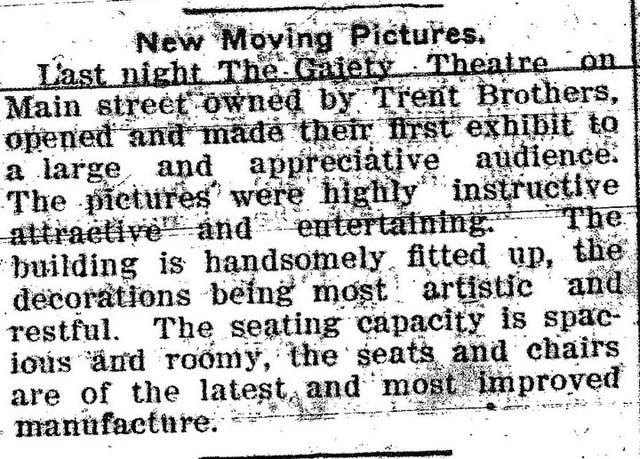 Little is known about the Gaiety Theatre in Danville, Virginia. It was a low-end vaudeville house with only about 200 seats at most. It had a short life. Best estimates are at about 3-4 years. The theatre was long and narrow. The building only measures about 20 ft wide and about 160 ft. long. The basment brick walls still show small signs of where the floor slanted. The stage was very small as well 15 ft. wide and probably 25-30 ft. deep. The best anyone can do is guess.

The theatre space is now part of a furniture store called the Atrium Furniture. The building also once held Advanced Auto Parts. There are remnants of the old canal systems at the rear of the building and that dates to 1820. The Gaiety Theatre was probably a first attempt by a local to start his own theatre business or architectural firm, but like I said at best anything is a guess.

If anyone has any information or pictures on the Gaiety Theatre in Danville, Virginia please let me know or post them here.

Also if anyone as any photos or additional information please forward them to the Downtown Director, Liz Sater. Visit the website, www.downtown-danville.com, for her contact information. Also you may contact the Director of Community Development, Anne Moore, at the City of Danville website, www.danville-va.gov

Business Directories written by the City of Danville only mention the Gaiety Theatre once and that was in 1908. I have searched the blueprint archives at City Hall and have not come across any records of the theatre. Those blueprints and records span from 1833 to 1980. According to the City of Danville, the City was not required to keep copies of the building blueprints, so it is possible they were just thrown away.

I would recommend that you search the local newspaper archives for advertisements for this theatre. Since you believe this theatre was operating in 1908 I would suggest that you start with that year.

What’s the story on the theater acroos the river and up a block that contained a florist shop for many years?

The North Theatre is now open. The next show is OUR TOWN, presented by the Galielo Theatre Guild. The show time is 7 pm on March 11th and 12th.

Trade Journal The Moving Picture World published the following item in its issue of October 3, 1908:

“Danville, Va.â€"The Gaiety Theater, owned and managed by Mrs. E. R. Shepherd, of Richmond, Va., opened its doors to the public on September 14th, played to standing room the first night and has been turning away business ever since. The building is handsomely fitted up, the decorations being most artistic and restful. The chairs are all of the Hardesty automatic folding and revolving type and the seating capacity 300. The house is devoted exclusively to moving and talking pictures. Jas. F. Jackson, recently of Music Hall, Webster, Mass., has been secured as electrician and operator. He is a licensed operator, a member of F. A. T. S. E., No. 144, Boston, Mass., and he is making some of the crank-turners here sit up and take notice.”

The reference to “talking pictures” must have meant that the house was equipped for the Gaumont Chronophone system, or one of the other early sound systems available in 1908. This page from Silent Era has an extensive list of early sound films.