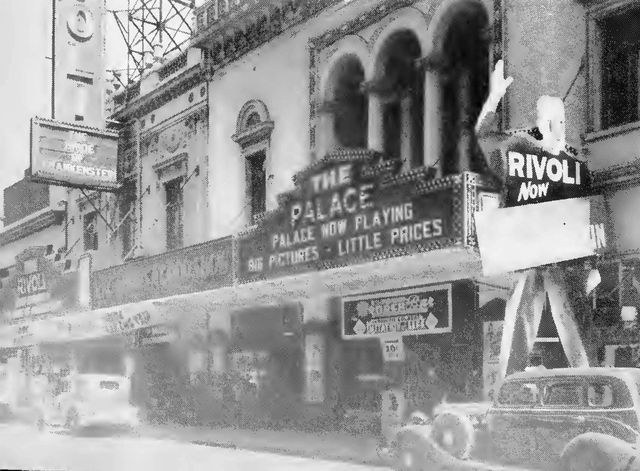 The Empire Theatre, located next to the Rivoli Theatre on N. St. Clair Street, opened in 1901 as a vaudeville and stock company theatre. By 1904, it was a burlesque theatre, and gained a notorious reputation.

After 1919, it became a movie theatre and was renamed Palace Theatre. It closed in 1968, and both it and the Rivoli Theatre were both razed a year later.

The Palace was my personal favorite of the Toledo downtown theatres. I read somewhere that it was originally named the Empire and was later changed to “Palace”. It’s interior design was more of an opera house. In the 60’s the Palace would play double features with a heavy mix of action fare and adult fare (non x rated. Think Russ Meyer), home for many of the numerous Godzilla films of that era. The Palace did open “A Hard Days Night” first run in Toledo resulting in long lines of people camped out overnight under the large marquees of the Palace and Rivoli which stood next door. This was the only time I remember the balcony of the Palace being opened. The crowds were incredible and the screaming female Beatle fans made viewing and listening in glorious mono all but impossible.

Here is a photo from the Toledo Public Library:
http://tinyurl.com/2s46j9

It is truly a crime that both the Rivoli and the Palace were demolished in the same year! What a loss for the City of Toledo!

I wonder who the architect was for the Palace being next door to the Eberson designed Rivoli?

I am not sure who designed the Palace in Toledo, Ohio as it was indeed built before the Rivoli. The Toledo Public Library has a pretty good collection of photographs featuring the various downtown theatres. The Palace was in fact originally called the Empire and featured live vaudeville performances. When urban renewal hit downtown Toledo the theatres were the first to go. In the sixties Toledo had a thriving downtown with numerous choices for film entertainment. If you visit youtube.com and type in Paramount Theatre Toledo, there is a long shot of Superior Street that quickly shows the Royal as well as the tower signs of the Loop and the
Esquire. It is my understanding that the former Esquire building is now slated for demolition if not already gone. The last time I was there it was still standing but empty. How sad for this city. The same time the Valentine was being restored the Pantheon was being demolished on the same street no less. It breaks my heart to stand in front of these long gone beauties and feel the ghosts all around. If my memory is correct, I think the Gayety on Summit Street was the first downtown theatre. The Palace (Empire) and the Town Hall (People’s Theatre, Capitol Theatre) might have been the next ones built.

I was born and raised here in Toledo and I well remember going downtown to the Rivoli and the Palace Theatres just about every Saturday and Sunday. Simply breathtaking interior. I was there when A hard Days Night opened with all the other screaming teens. The best times Toledo ever had. With the demize of the theatres, Tiedtkes, Lasalle’s, Lion store, Woolworth’s, Toledo died. Its too bad someone can’t find a way to bring it all back.

Chuck1231. The photo is of the Country Palace formerly the Peppermint Lounge in downtown Toledo. It’s not the Palace Theatre that was located on St. Clair Street next door to the Rivoli and across the street from the original entrance to the Valentine Theatre. A good photo of a Toledo landmark nonethe less.

John Eberson remodelled this theatre around 1925.

Was there a bar beneath The Rivoli during the 60’s called the “Underground”?