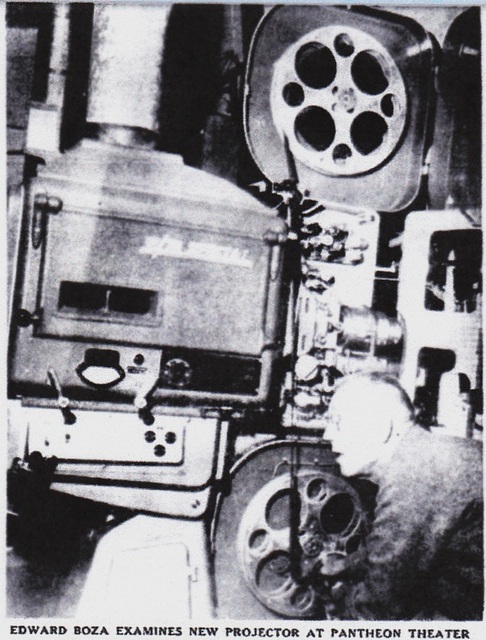 The Pantheon Theatre was opened November 19, 1919 with Dorothy & Lillian Gish in “Broken Blossoms”. It was located on N. St. Clair Street, between Madison Avenue and Adams Street.

It was remodeled in 1961, and the Pantheon Theatre closed May 17, 1977. It has since been demolished and a parking garage now sites on the site.

Circa late 1950s from the Toledo Public Library:
http://tinyurl.com/dkzqph

Skirball Brothers Theatres had the interior of the Pantheon completely rebuilt in 1961. There are three photos of the completed project on this page of the October 2 issue of Boxoffice. The seating capacity was reduced to 808.

M. G. Smith probably sold out to the Skirballs in the mid 50’s.

Here is a newspaper article about the proposed Pantheon Theatre, published in the Toledo Times, July 3, 1919.

“TOLEDO TO GET A COSTLY NEW PICTURE HOUSE

“HAS ONE HUNDRED THOUSAND DOLLARS CAPITAL.

“Incorporation of the Pantheon Theater Co. with a capital stock of $100,000 assures Toledo the erection of one of the finest motion picture houses in the country.

“The new company has taken over the property formerly occupied by the Kaiserhof cafe.

“The exterior of the building will be glazed terra cotta.

“A large foyer, which will accommodate more than 300, will be utilized as a dance hall on special occasions, and the dances may be made a regular feature of the program. Back of the lobby will be a large reception and music room, elaborately furnished, where concerts may be held.

“The stage will be 18 feet in depth. The proscenium will measure 30 feet and there will be an elaborate equipment of built-in sets and scenery for special features.

“Elaborate simplicity is designated as the keynote of the decorations which will make the new house one of the most beautiful in this part of the country.

“There will be no balcony, but the theatre will have a seating capacity of 1,200. A $25,000 Hope Jones organ will be installed.

“A large canopy will be built over the street and there will be a double ticket window. A new lighting system, on the order of the ‘flood light,’ will be used.

“Rest rooms, a private projection room and dressing rooms for the ushers and performers will be located in the basement. A play room for children will also be down stairs.

“H. C. Horater, John Kumler and John J. Gardiner are the incorporators of the new company. Horater, who is manager, secretary and treasurer of the Alhambra theatre, will continue as managing director of both companies. Gardiner is president of the Alhambra Co.

“The Alhambra theatre was built eight years ago.

“Four years ago Horater took the active management and with a policy of showing only the best pictures has made it one of the best known motion picture houses in the country. The most promising features procurable in motion pictures have been secured for exhibition at the new house during the coming year.“

The May 19, 1977, issue of the Toledo Blade published this article headlined “Pantheon’s Screen Goes Dark For Final Time As Last Picture Show In Downtown Is Closed.” The theater had shown its last movie on Tuesday, May 17. The Pantheon had opened on November 19, 1919, with the Lilian and Dorothy Gish feature Broken Blossoms.

The article includes mentions of many of the Toledo movie theaters that had closed over the years. The Pantheon was the last of the more than a dozen downtown cinemas that had been in operation fifty years earlier. The only theater still open downtown after the Pantheon closed was the Esquire, which was operating as a live burlesque house.

The March 27, 1920, issue of Motion Picture News said that M. M. Stophlet and M. B. Stophlet were the architects of the Pantheon Theatre. Following a precedent set a few years earlier by Detroit architect C. Howard Crane, Stophlet & Stophlet gave the Pantheon Theatre a large section of stadium seating accounting for about half the capacity of the house. They would again use the stadium configuration in Toledo’s Ohio Theatre, opened in 1921.

As in the Ohio, the architects gave the interior of the Pantheon Theatre a very simple, almost austere, style with minimal decoration, and what there was being based mostly on Roman Classical elements. The front, on the other hand, was fairly ornate, with its eclectic details including elements suggestive of both the Italian Renaissance and the Gothic styles, but not exactly replicating either. The contrast between interior and exterior must have been quite startling for the theater’s patrons.

Manfred M. Stophlet appears to have been more frequently the lead architect on the firm’s projects, with the trade journals of the period more often attributing designs to him than to his brother Mark B. Stophlet.

Although the spelling Sophlet somehow got into the NRHP registration form for one of their buildings, the correct spelling of the architects' surname is Stophlet. That is the only spelling I’ve found in trade journals from the period in which they practiced, but more importantly it is the spelling used in the files of the American Institute of Architects, which includes their membership application forms and other documents.

Oh so many fond memories of Sunday afternoon’s watching movies (and boys) at the Pantheon! Hopefully historic preservation will start to replace the tear-down mentality in downtown Toledo.