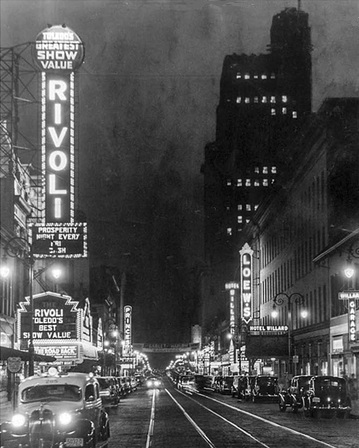 The Rivoli Theatre, located next to the Palace Theatre on N. St. Claire Street opened on August 19, 1920 with Mary Miles Minter in “Sweet Lavender”. It was remodeled in 1930 by architect John Eberson. It closed in 1968 and, along with the Palace Theatre, was razed in 1969.

Any information or pictures of the Pantheon would be appreciated.

Hello friends,
Being from New York City, I have spent much time on Cinema Treasures
researching the rich theater history we have here.You may find it unusual that this post pertains to a television episode from the series MAS*H.Many of you perhaps know the fictional character from the series Maxwell Q. Klinger, a Toledo resident who is trying to get out of the army by dressing in women’s clothes. Well in last night’s episode ,Max is acting like he’s back home in Toledo, although he’s still in war time Korea. At the breakfast table, he’s talking to the guys and mentions “Hey did you see them demolish the Rivoli Theater yesterday”. Right away I decided I would check, and lo and behold, there is a Rivoli in Toledo! Being it was the Korean War (1950-1953) the time line was out of place, demolition date of 1969. Since you had the time to read my story,as a fellow member, I invite all the good folks of Toledo to visit the New York City CT pages, especially the RKO Madison and Ridgewood, which are located in my hometown. The Ridgewood has just been closed after 91 years of consecutive operation. We have an online petition currently in operation to save this beloved 1916 beauty, would you please take a few minutes of your time to review and possibly sign? Thank you and best wishes.
View link

THROUGH THE 50’S,MY FATHER WAS THE MGR OF THE RIVOLI F L HAYES,MY AUNT MARY WORKED IN THE CONNCESION STAND I WAS DOWN THEIR EVERY NIGHT FROM 54-58 WHEN MY FATHER DIED I WAS 8 ANY PICTURES OR ANY INFO WOULD BE GREAT I'AM STILL IN TOLEDO .

THANK YOU VERY MUCH,

Hello, I was born in Toledo, Ohio in 1942. I grew up going to the theaters in downtown Toledo from 7 years old till I was 12 I would like to see pictures of all of the downtown Toledo theaters. The Rivoli, Pantages, Paramount, and the Gayaety, which was a Burlesque theater. (I sneaked in there when I was 10 and no one said a word to me or bothered me. I did find pictures of the following theaters at (http://americanclassicimages.com) Palace, Esquire, Valentine, Pantheon, Royal, Loop. Any help would be appreciated. I was 10 and attended the Premier of Johnny Dark at the Rivoli (1953) the story of the Kaiser Daren staring Tony Curtis

William Speck’s book Toledo: A History in Architecture says that the Rivoli was built in 1920. I have found references to the theater being in operation during the 1920s. The Wolfsonion collection’s index of John Eberson’s work lists the Rivioli only as a 1930 remodeling project, so he must not have been the original architect. So far, I’ve been unable to discover who did design this theater.

In the absence of interior photos, I don’t know how extensive the 1930 remodeling was, but the only exterior feature of the theater that was ever changed appears to have been the marquee. As the house was only ten years old in 1930, I doubt there was much alteration of the interior either. The ground floor front eventually got a streamlined update, with vitrolite panels and new metal door hardware, but this is not seen in photos from the mid-1930s, and so must have been done quite some time after Eberson worked on the house.

The facade at least was never Art Deco, except for that marvelous zig-zag marquee, as numerous photos such as this one show the building’s classical details such as fluted pilasters with ornate, composite capitals, swagged garlands with festoons, a denticulated cornice, and balusters along the parapet, which is surmounted by four pairs of urns. This decor was all intact until the theater was demolished. Whoever the original architect was, he had probably attended the Ecole de Beaux-Arts, or had studied with someone who had.

The Rivoli was a very extensive reconfiguring of the much older Arcade theater, which had its entrance on Jackson Street around the corner from St Clair entrance of the Rivoli. The C. Howard Crane firm also has a notation in their commissions list for work on both the Rivoli and Palace but the extent of the work is not noted and no drawings survive. During the demolition a very large part of the roof structure fell all at once as a result of not being constructed the way the workers expected, a sign of it being a major structural remodeling. The interior was more accurately described as Italian Renaissance, which was in keeping with the exterior main facade design. A surviving settee from the balcony level of the lobby is in that style and venetian green painted carvings.

wcjfrisk’s comment reminded me of something I’d seen, so I hunted down the following piece from the July 14, 1919, issue of The Toledo Blade, as quoted in a 1919 book called “Motion Pictures as a Phase of Commercial Amusement in Toledo, Ohio,” by John Joseph Phelan:

“The Sun & James Amusement Co., New York, has leased the property now occupied by the Arcade theatre, St. Clair and Jackson streets, and will construct a $300,000 theatre building.

“The deal was closed Monday, through Thomas Davies, of the Thomas Davies Realty Co. The building, it is expected, will seat 3,000. It probably will be used for both vaudeville and moving pictures.

“Work in tearing down the old Arcade theatre building already has been commenced and it is planned to have the new theatre ready for opening January 1.

“Gus Sun operates a theatre in Springfield, O., and W. M. James, a former Toledo man, owns the Broadway theatre in Columbus. Other theatrical men are said to be interested also.

“The new theatre auditorium will be built back from the street and it is planned later to build a large office building surrounding it and facing on St. Clair and Jackson streets.”The same book includes the Arcade Theatre (listed as the Strand Arcade) at 438-40 St. Clair, and gives its seating capacity as 1,224. As the Rivoli has nearly twice the seating capacity, this had to have been a virtually new theater, even if part of the old Arcade was incorporated into the new construction.

The 1903 edition of the State of Ohio’s “Annual report of the Department of Inspection of Workshops, Factories and Public Buildings” has an entry for the Arcade Theatre. It a statement of changes the Department had ordered to be made to the building:

“No. 20—Empire Arcade—Mrs. Nettie Poe Ketcham (Toledo), November 19, 1902—Change exit doors on Jackson street so as to open outward; cut down third and seventh windows from stage on east side of auditorium and convert them into doorways, doors to be hung so as to open outward; provide six chemical fire extinguishers of four-gallon capacity each, two to be placed on stage, two in rear end of auditorium and two In gallery, of such style as approved by the National Board of Underwriters; repair fastening to gate in alleyway, between the Arcade and Empire Theaters, so that same can be opened easily. Complied; certificate Issued.”

An item about the Valentine Theatre in the July 25, 1908, issue of The Moving Picture World also mentions both the Arcade Theatre and the Empire Theatre, saying that the Empire was across the street from the Valentine, and the Arcade was in the same block of St. Clair Street. It appears that the Arcade’s doors on Jackson Street were probably always exits, not an entrance, at least from 1902 on.

I was unable to find either the Rivoli or Palace mentioned by name in the list of C.Howard Crane’s theaters in “The Theater Designs of C. Howard Crane,” a thesis by Lisa Maria DiChiera, but the list includes the Empire Theatre in Toledo as project #345. The date is not given, but the Allen Theatre (later the Capitol) in London, Ontario, which opened in February, 1920, was listed as Project #343, so it fits the time frame of the Rivoli’s construction.

As both the Empire and the Arcade were owned by Nettie Poe Ketcham, it seems possible that the project of rebuilding the Arcade might be listed under the name of the same owner’s adjacent theater that was still in operation. The finely detailed Beaux Arts facade of the Rivoli is certainly characteristic of Crane’s work of the period. In fact, many of the details of the Rivoli’s facade are almost identical to details on the facade of Detroit’s Orchestra Hall, built about the same time. I’d say it’s very safe to assume that the Rivoli was indeed the work of C. Howard Crane.

Was there a bar beneath The Rivoli during the 60’s called the “Underground”?

There was a later MAS*H episode where Max Klinger was pretending he was in Toledo (another attempt at getting his cherished Section 8)and tells Colonel Potter at the end that the Rivoli Theatre was being torn down to make way for a three story high rise. I just saw the episode last week.