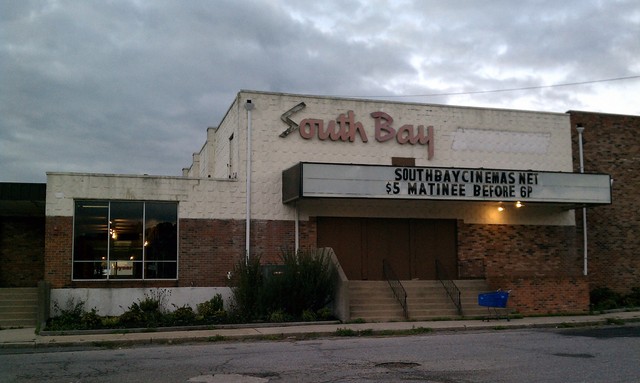 The South Bay is a free standing building within the shopping center it is located in. It was opened by Imperial Theatres on June 28, 1967 with John Wayne in “El Dorado”. It was closed in November 2016 for renovation.

It must be opening soon, the theatre been on the fandango app for a few weeks now

Had it not been for a single worker that I observed entering the building with a small wheelbarrow I would say that nothing has been done since I went by in January. Same cracked windows. Same faded ragged curtains. What he was doing is anyone’s guess.

Same broken windows and faded ragged curtains. Only difference from my March visit was the presence of a small BobCat inside the fencing near the old box office. They’re still in a demolition phase? I thought when they patched up the cracks in the facade, painted it, reinstalled the South Bay signage, upgraded the pylon to include a web site and phone number and installed five new ceiling units (the initial reno called for two additional auditoriums to the three in place)that the “end” was near. The reality may be that the lack of progress to date and whatever comes of the entertainment industry after Corona may mean the end, period.

Still broken windows and ragged curtains. BobCat doesn’t seem to have moved. The only change I see is the addition of a Portapotty.

robboehm — I’d like to use this, my 300th comment on Cinema Treasures, to thank you for keeping track of the first movie theater I ever attended back in 1974, the South Bay Cinemas. (See my comment posted on January 17th, 2016.)

Interesting that although all of the cinemas I recall visiting on Long Island from then through 2000 are gone, the one that still might reopen and carry on as a movie theater is the first one I ever went to.

David, you’ll have to wait a couple of months for my next comment but, the way things have not been going, will probably be more of same.

I was only in the theater once with friends to see Sister Act. I remember not being impressed with the theater which was probably a triplex by that time.

robboehm, yeah I’m not saying the South Bay was impressive, just it was the first cinema I was ever at. : ) When I was last there in the summer of 2000 with my late mother to see “Bring It On”, it did seem somewhat rundown. …. Wow, I just realized my mother, the person I went there with the final time, was the person I was there with the first time. (All my visits in between were without her.) As we approached the entrance I may have said something like “You brought me here in 1974”…..

I just found out by perusing Cinema Treasures listings that the Islip Theater, which had closed after I last visited it in 2000 to see “The Perfect Storm” or “X-Men”, has since reopened as the Islip Cinemas, so one of the cinemas I recall attending is still a movie theater. Other than that I get the impression there are currently no operating movie theaters that close to the Babylon/West Islip/Bay Shore area, while in my time there were several choices.

David, the only thing the South Bay has in it’s favor is parking. And that usage is questionable since they only, legitimately, have a small area around the building. The area used to have the Lindenhurst, Babylon, North Babylon theaters but somehow in it’s dilapidated condition the South Bay soldiered on. The pandemic will be the end of many theaters because of fear and social distancing. So many theaters have just about destroyed their viability when they severely reduced the seating capacity with the installation of recliners. So in an auditorium under 100 seats, which seems to be the case, more often than not, social distancing and reduced capacity percentages spells doom.