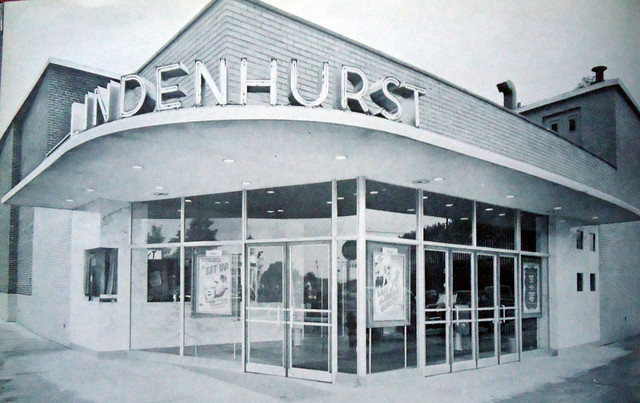 This theatre opened on December 25, 1948 with Van Heflin in “Tap Roots”, under the Prudential Theatre Circuit, a Long Island exhibitor. It has 625 seats on the main floor and 140 in the loge.

It was taken over by UA Theatres in 1968 and was a first run house during this time. In the 1980’s and 1990’s, its price policy was as a reduced price theatre. In 1998, UA sold the theatre to 5 Star Cinemas which did some repairs but not to the falling apart seats and failed to keep the theatre clean.

This popular movie house served the area for 54 years, and closed on Thursday July 18, 2002 with “Sum of All Fears”.

“I am in communications with the village and Chamber of Commerce to clean up and re-seat the theatre that has gotten a bad rap.” – Orlando Lopes

Sadly, it was demolished in February 2014.

The Lindenhurst Theatre has been demolished, the last part the building went down on Saturday, February 1, 2014. Interior demolition began three weeks ago and the well built building took slightly longer than the expected one week I was told it would take. The demolition foreman told me that he had never demolished a building in such good condition. By the way a CVS will replace the theatre and the 3 parcels of land. The CVS will run from Wellwood Avenue to Washington Avenue. Lindenhurst can now boast they have the “biggest” CVS drugstore on Long Island. P.S. The cost of the 4 properties cost CVS 6 million dollars. The CVS in the village will close once construction is completed. I filmed and photographed as the walls came down daily and would like to post them but I don’t have a private computer at home. Farewell to the LINDENHURST Theatre 12-25-48 to 2-1-14.

The exterior walls and signage are all up. Just need to complete a bit of the facade, the parking lot and the interior. I would think CVS will open by July 4th.

In the last few years of it’s life they added signage to the Wellwood Av and Montauk Highway section of the building above the marquee. It would be nice if someone could find a picture showing that.

Forgot how to ad pix.

Little did I know as a six month old baby celebrating his first Christmas that down the street the “new” Lindenhurst Theatre opened. I saw my first movie there a re-showing of the classic “Snow White” in 1953. The rest is history. My last time there was August 1965 and my family moved.

THE FIRST MOVIE I SAW THERE WAS “MARY POPPINS”,LATER I SAW"COOL HAND LUKE"and"THE EMMIGRANTS"with MAX VON SYDOW and LIV ULLMAN.WHEN I MOVED TO LINDENHURST I WOULD PAY $1.00 IN LATE “70’S"and"EARLY"80’S.FOR ONE DAY THE THEATER WAS A DRIVE-IN "HA,HA”!

Prudential also had a $1.00 price policy at the Northport.

SOME TIME IN THE"80’S" A CAR CRASHED IN INTO THE LOBBY,SMASHING THE ORIGINAL “1948"GLASS AND WOOD FRAME WINDOWS.IT WAS REPLACED WITH METAL FRAMES AND NEW GLASS.IF YOU DIDN’T KNOW AFTER THE REPAIR IT LOOKED THE SAME.

Added a photo showing building modifications when a boat dealer. 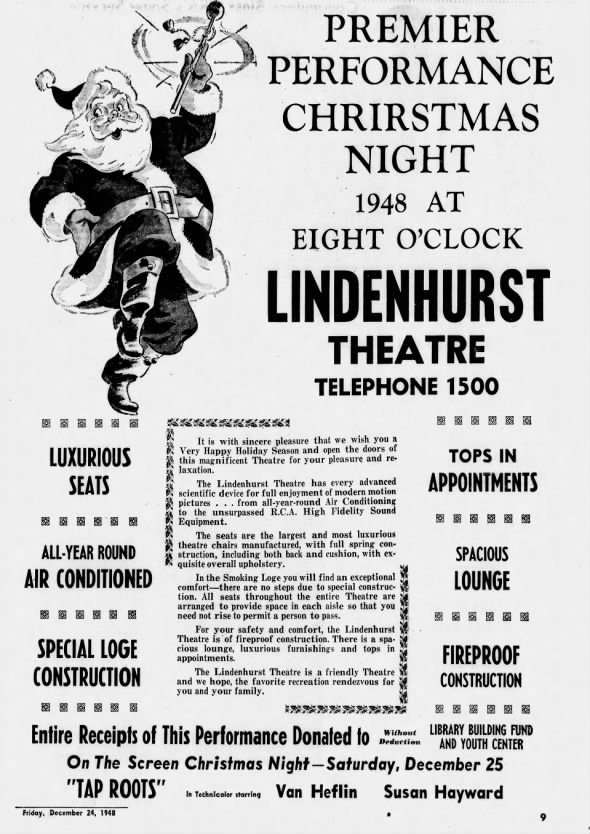