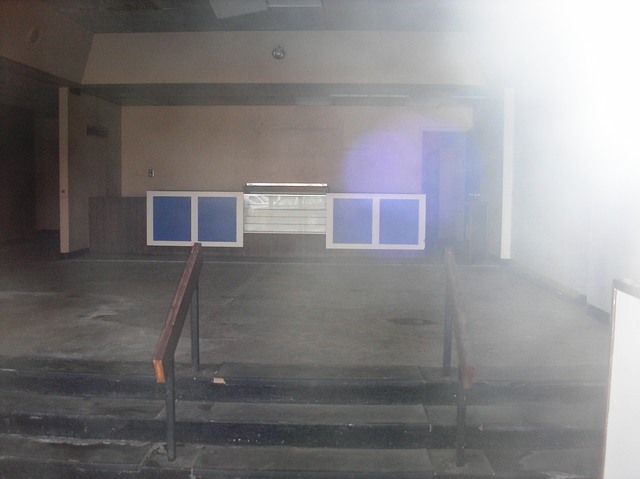 Opened August 14, 1969 with Jack Lemmon in “The April Fools”. It was intially opetated by Martin Theatres and was soon taken over by Loews. It was tucked behind the Madison Square Shopping Centre, this cavernous structure anchors a small collection of retailers surrounded by an ocean of asphalt. One area local recalled that this was the theatre to see “Star Wars” during its initial run. It would be great to get this place cleaned and back up and running in time for the final installment of the “Star Wars” series.

Got it. i have been here,should have remembered, but Man we see a lot of Theatres.looking for Nick to put a bunch of Theatres on soon,I sent a package full.He asked for it.LOL.

The Madison Square Theatre building is now home to Covenant of the Cross church. The auditorium was extensively remodeled.

TSLowes: I worked there in the 70’s also, in the concession stand. Johnny Cash’s “The Gospel Road” premiered there, and I still have the signed copy of a bible they were handing out.

Imax I have most likely posted this before Johnny used to bring his kids there when he was in town in the late 70,s.

I worked at this theater for about 4 or 5 years and it was named Loew’s Madison Theater, not Madison Sq. Theater. I remember Mr. Sokol and his train set he would get out at Christmas. I was manager of the concession stand and remember Johnny Cash coming in. He would load up the the kids in his neighborhood (he lived in Hendersonville) along with John Jr. and bring them all to Disney movies. The Loew’s Cresent was downtown on Church St. The Loew’s Melrose was in Green Hills ( a suburb of Nashville) on Franklin Rd. The pic you see above is the old theater; however, it is now remodeled into a church. Mrs. Cockrill was the older lady that worked the box office and Mr. Beard worked the door- both have been dead for many years. Imaxguy, I don’t know who you are, but I don’t remember a guy (if you are) that worked in the concessions.It was all girls. Kirby Jefferies was the manager when I worked there, as well as another guy I can’t remember. I still have the first Rocky poster and Raging Bull tucked away. I remember having the first ‘pong’ video game machine in the area. Mr. James Van Deuren was the projectionist- very heavy set dude. My younger sister also worked there too. Great times!!

The Loew’s Melrose was in the community of Melrose; Green Hills is on Hillsboro Road.

It’s also a great place to watch anything required “sensa-round” sound with the theater setting next to a mainline railroad that’s quite busy. The passing trains would give it that extra vibration to experience earthquakes. I guess it would work with imperial star cruisers.

This item from the August 10, 1969 issue of The Tennessean contradicts our current description of this house. It says that the Madison Theatre was opened by Martin Theatres. I notice that the grand opening ad uploaded by Mike Rivest doesn’t mention either Loew’s or Martin, but it must have been a Martin house first, later taken over by Loew’s.

Architects were the Columbus, Georgia firm Brookbank, Murphy & Shields. Predecessor firm Brookbank & Murphy had designed Martin’s Georgia Cinerama in Atlanta in 1965, and probably did a number of other projects for Martin during this period.