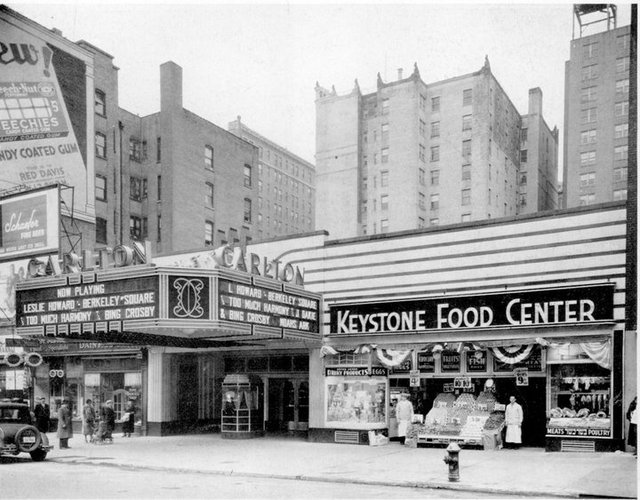 Opened in 1912. It was remodeled to the plans of architect I. Irrera in 1933. In October of 1952 it shared a block advertisement with the Greenwich Theatre and Schuyler Theatre playing very late run double bills.

The building was demolished in the summer of 2005.

Is this the building that partially collapsed during demolition, a few weeks ago?

The New York City building permits database has a new building listed for this address in 1912. It was a “1-st[or]y theatre and moving picture show” designed by architect H.B. Herts for a Mr. William E. D. Stokes. The cost listed for the project was $35,000.

If the Carlton was this 1912 project, it would have been either Herts as the sole architect, or Herts with Herbert J. Krapp (though the database entry doesn’t list Krapp) as Herts and Hugh Tallant had dissolved their partnership by 1911, but Krapp, once an apprentice at their firm, continued to work with Herts until 1915.

I’ve been unable to find in the database any mention of a building designed by Raymond Irrera at this address. Perhaps he was responsible a remodeling job.

This Theater was originally called The Riverview. It became the Carlton Theater then the Carlton Terrace Ballroom.

Here’s a program for the Keystone Theatre from May 1925, listing the address as Broadway between 99th and 100th Streets. Is that the same address of the Carlton Theatre?

The theater was showing double features of silent films in 1925. The entire program can be seen at [url]http://www.silentfilmstillarchive.com/new_york_keystone_may2_1925.htm[/url].

The November 15, 1913, issue of The Moving Picture World had a short article about the Riverview Theatre. Judging from the description the magazine gave, the auditorium must have been rather tunnel-like, being 219 feet long, 40 feet wide, and 35 feet high. The projection booth extended above the rear part of the seating, with a throw of 150 feet to the 14x18-foot screen.

As I recall it, having grown up in the neighborhood, soon after the Carlton closed it became a super market, as did the Midtown theater on the east side of the street directly opposite it. Can someone confirm?

The Midtown, later called the Metro, then the Metro Twin, was gutted some point over the last 5 years. The facade was Landmarked but the interior was not. Urban Outfitters was going to move in there but instead took a space in the sore thumb of Broadway on the Upper West Side, the Ariel West. Sephora was rumored to be interested but again nothing happen. I would not be surprised if there are / were structural issues that would be expensive to correct. This would explain why two big chains passed on the site. The facade needs a cleaning and the marquee is still there (albeit shored up with support columns).

Rollich: The Midtown has its own page at Cinema Treasures, and is listed under its final name, New Metro Twin. It has about ten times as many comments as the Carlton page, so many more people must remember it. And according to an earlier comment about the Carlton by DougDouglas (click the View All Comments link above) the Carlton was converted into a supermarket in 1980, but had closed as a theater some time earlier.

Here is a clickable form of the link to the 1933 photo that iatse311 posted in an earlier comment.