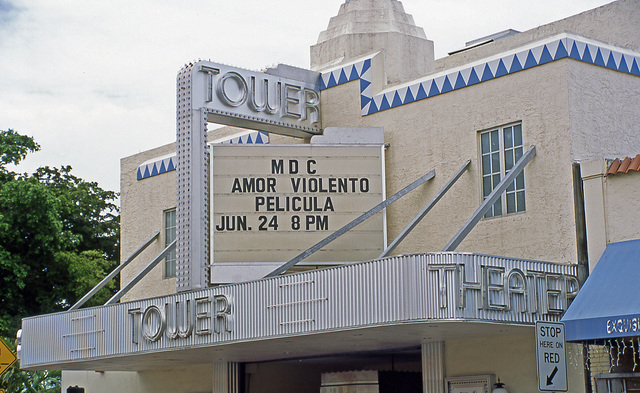 The Tower Theater was a Wometco first run house that found itself in the heart of the Cuban exile community by the late-1950’s. Switching to Spanish subtitled double features with the occasional Spanish language film, the Tower Theater, or Teatro Tower as it is known in the neighborhood, often showed Disney films outside the seven year cycle as it followed the Mexican Disney release pattern. I saw “Pinocchio” here as a child during one of its many re-releases.

Despite being physically unimpresive inside or out, the Tower Theater is now notorious for its controversial city funded remodel, it’s political location next to the anti-Castro conclave known as Domino Park and its even more notorious history as a fund raising venue for Castro himself.

The link needs to be updated:

This opened on December 20th, 1926. Ad posted in this theatre’s photo section.

AlAlvarez, The Town was one of the first movies I ever went to when I moved to Miami, in late August 1961 I saw “The Savage Innocents” with Anthony Quinn. “Hang Down Your Head Tom Dooley” was playing in the juke box in a nearby coffee shop and I had a Yoo-Hoo. And I think it was there I later saw “El Rufián”, a good Argentinean suspense movie, and “La Novia” with Chilean Antonio Prieto.

Guarina, you remember LA NOVIA? Nobody else seems to.

It seems to have escaped history and it was one of my late mother’s favorite films.

I can still remember Antonio Prieto singing “Blanca y radiate va la novia…” as he walked down the aisle of the church as his heart sick love married her doctor, and not him.

Al, Yes I remember “La Novia” very well; several scenes have stayed in my mind all these years. The movie was a little “sappy”, but I loved the song, “Ante el altar está llorando, todos dirán que es de alegría”.

The Tower had a really awesome WTVJ Channel 4 neon clock inside. As kids we frequented the theater often. It was always a double feature (spanish subtitles or spanish language) and very cheap. At the time, it was still owned by Wometco. They used to play those spanish Mexican cowboy movies, which were in spanish, but in addition to that, they played mostly current American films with spanish subtitles. I think the last time I attended a movie there was in 71 or 72. The #5 bus took us there, as well as Downtown, where most of the more recent films played.

The Florida, Miami, and Paramount were mostly first run films, until Downtown crapped out. At that point, the aforementioned theaters became stores or small malls. Horrible choices, but Wometco was increasingly getting out of the theater business during those times.

Hey Louis, I remember that clock. It had a blueish hue that was on all during the movies.

Status should be “Open (Showing movies)”

The Tower has been a movie theater again as of a few years ago, showing foreign and independent films, and is one of the Miami International Film Festival venues.

Website is http://www.towertheatermiami.com though the one still listed on this page redirects there.

I enjoy being able to use the historic box office, while some other renovated cinemas I’ve visited now have you buy your ticket inside instead while the old box office lies dormant.

I like getting a Cuban coffee for 75 cents at Exquisito’s window directly next door to the theater and observing the street life before seeing a film.

And across the street is Azucar, an ice cream shop that sometimes serves “Burn in Hell Fidel” flavor. : )

Funny, apparently there is a model of the exterior of the Tower Theater in the Little Havana portion of Miniland in the Legoland theme park near Orlando:

Click here for a Youtube video of an episode of “Roadside Florida”, set to begin as the model appears.

(Also, Google for images of “Miniland Little Havana” and you might see the model in its surroundings.)