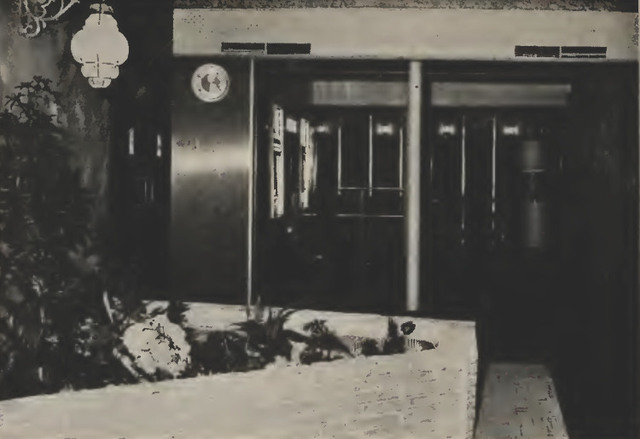 The New Parkway Theatre was opened on September 30, 1938 with Mickey Rooney in “Judge Harfy’s Children”. In 1948 it was taken over by Wometco Theatres and operated as an art theatre with an art gallery in the lobby. It was closed in 1958. A great neighborhood house specializing in foreign language and off-beat films. It was reopened by an independent operator on May 12, 1961 with Margot Fonteyn in “The Royal Ballet”. It was closed in 1982.

Was the Parkway site toward the east end of Coral Way? Sometime in the late 80s, a Miami Herald columnist mentioned that during the Parkway’s demolition, the remnants of a painted 1930s Coca-Cola ad became visible on an adjoining building, and later restored. I recall seeing such a display en route to (probably) the Miracle Center 10 or Miracle 4 one day around that time. Been a good 20 years, I’d be surprised if any of the old structures remain (and the Google map link above shows photos of a residential area).

The Parkway was indeed located near where Coral Way bends on its way to 1-95.

The building is demolished but I have not noticed the Coca-Cola sign.

Thanks for the address revision, Al. Just checked the street view on Google maps (probably photographed within the past few years), and it appears the Coca-Cola ad is gone, possibly its host building with it. Looks like the property is/was a parking lot now. Had I been around 10 years earlier, the Parkway might have been a regular stop on my art film/bookstore/record store crawls (but I still had plenty of those in Gables and the Grove back in the day).

I went to the Parkway when I was in grade school in the 50s. They ran a double feature with a serial and twenty or so cartoons on Saturday. There were also live shows — I remember a yo-yo contest on stage sponsored by Duncan Yo-Yo.

The Coca-Cola sign was visible for many years after the Parkway was demolished, and the demolition also revealed a sign the spelled Parkway as two words, i.e., Park Way. This signage was on the side of photographer Brian King’s studio, which sat between the theater site and the Parkway Pharmacy. I assume that “Parkway” referred to Coral Way, which was actually paved with coral in those days. I have a shot of the Parkway which I’ll post to flickr as soon as I have a chance to scan it.

I believe that pharmacy was actually called the Parkmore. Shortly after the Parkway Theater was demolished, I was heading over to visit a photographer friend of mine – the late Robert M. Kelley of Kelley Photography in Coral Gables – and spotted the Coca-Cola sign.

Bob loved Miami Nostalgia as much as I did (he was born here in 1926), and rushed over shortly thereafter to photograph the wall with the vintage sign as soon as I told him about it.

Of course, the mental midgets in this town are more interested in money than historic preservation… so you KNOw what happened to that sign. A similar “Hamburgers -10 Cents” sign showed up after the Little River/Bard/79th Street Art theater was demolished… and that sign is also a memory.

AlAlvarez, the photograph shows the N.W. corner of Coral Way and 13th Avenue, 1301 Coral Way, that is not exactly the location where the theater was, the Parkway used to be half a block east, on Coral Way between 12th and 13th avenues, it’s now a parking lot. Zuperpollo restaurant is to the east, I think there used to be a beauty parlor to the west, now vacant. Once a fine art theater, with chess board tables in the lobby and complimentary coffee. Times gone by. The last movie I saw there was “The Robe” and there were 12 people in the place.

Last film I recall seeing at this theatre was Bertolucci’s “Luna”. It was cutting-edge subject matter.