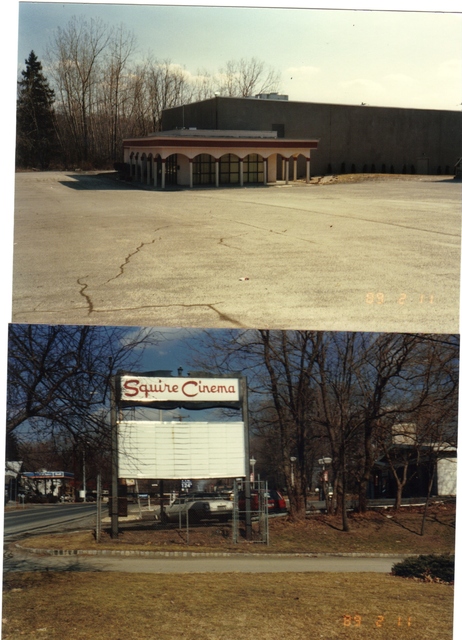 Located at Route 94 and Union Avenue in New Windsor, NY. The Squire Cinema was opened in February 1966 with “Those Magnificent Men In Their Flying Machines”. It was a single screen theatre with 800 seats. It was sold to Cinecom Theatres in 1969 and was twinned in 1979. The Squire Cinema was closed on February 5, 1987. As of 2012, it still sits abandoned behind a shopping center.

The Squire Cinema was located in a small shopping center in New Windsor-just outside of Newburgh. It had a great marque out front and a very large auditorium. It opened in 1965 and twined in 1979, closed in 1986 when a multiplex opened in Newburgh near the mall on Union Avenue.

I went by it today to take photos and it seems this one has been sitting there vacant for 25 years now!

There are additional pictures of this closed theatre on its page at CinemaTour.

wow, intresting.. i wonder if the seats and screens are still in there??

This is in New Windsor.

As manager I opened this theatre in February 1966. We opened with “Those Magnificent Men In Their Flying Machine.” A Bi-Plane was placed on the roof of the lobby, unfortunately the next day was a heavy snow storm which bent the wings down to roof level. We (Spyro Lenas) then opened the Mid-Valley Cinema across town in the (open) mall. Both theatres had 800 seats. The Mid-Valley was the more successful of the two. We also operated the Brookside Drive-In Theatre in Newburg and the Plaza Theatre in Poughkeepsie, NY.In the summer we played “day-and-date” indoor and drive-in.

All of the theatres were sold to Cinecom in 1969.

We used to go to o'mara’s after going to squire theater. Does anyone remember the restaurant/bar next to o'mara’s?