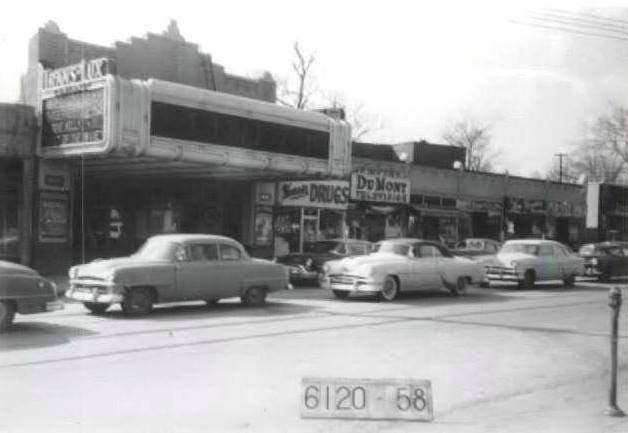 The Central Theatre was opened on May 14, 1936 with Robert Montgomery in “Petticoat Fever” & Warner Oland in “Charlie Chan at the Circus”. In 1948 it was taken over by Trans-Lux Theatres and in December of 1948 was playing Burt Lancaster and Joan Fontaine in “Kiss the Blood off My Hands” and Deanna Durbin in “For the Love of Mary”. In January 1957 it was renamed Central Theatre again. It was closed on February 1, 1958.

Since 1960 this former theatre has operated as a bowling alley.

The Central is currently a bowling alley. A floor was built inside the auditorium creating two floors of bowling lanes. The projection booth area functions as a locker room.

who wants to go bowling with me.
I am dead serious here.
I am compelled to check this place out.

Designed by William I. Hohauser

As I little boy, what I mean, when I was a young boy, (I was tall for my age) about 8 to 10 yrs old, I attended this theater in the 1950s. What I remember is that on Saturday afternoons, they still showed serials (Zombies of the Stratisphere) and there were “matrons” who tried to keep the kids in line. I remember seeing a revival of “Gone with the Wind” here (for the first time) and a newer movie, “The High and the Mighty” too, but not much else, except that the theater was undistinguished architecturally and its CinemaScope screen was not very impressive, just a regular “wide screen” with the top masking pulled down a little which made the screen smaller. not bigger.

The Paradise Lanes website says it’s been part of the community for 46 years. I remember going bowling there about 40 years ago. It was called Harness Lanes and the sign was posted on the old movie theater marquee.

Two interior photos of the Central as it appeared on completion (or after a remodeling- the article doesn’t say) in 1936 are at the bottom of this page of Boxoffice, November 11, 1936. If the lobby and foyer were typical of the house, I’d say it was of Art Moderne design.

I believe I saw a film at this theater in the mid 1960’s. I remember the cartoon. It would have been about 1966-1967 I was 3 or 4 years old. It was probably turned in the bowling alley after that. Anyone know the date it was closed as a theater?

The Central theatre opened on May 14th, 1936 with “Petticoat Fever” and “Charlie Chan at the Circus”. Grand opening ad posted.

In 1948, the Central Theatre became the Trans-Lux Central. That ten-year agreement lapsed in January of 1957. After months of closure, Raceway Theatre Inc. took on the theatre relaunching it as the Central Theatre, to show art and foreign films that failed quickly. Finally, an independent operator rebranded the Central as a family-oriented movie house in September of 1957 and closed after a short unsuccessful run on February 1, 1958. In 1960, the city agreed to allow a plan that converted the Central to a bowling alley.