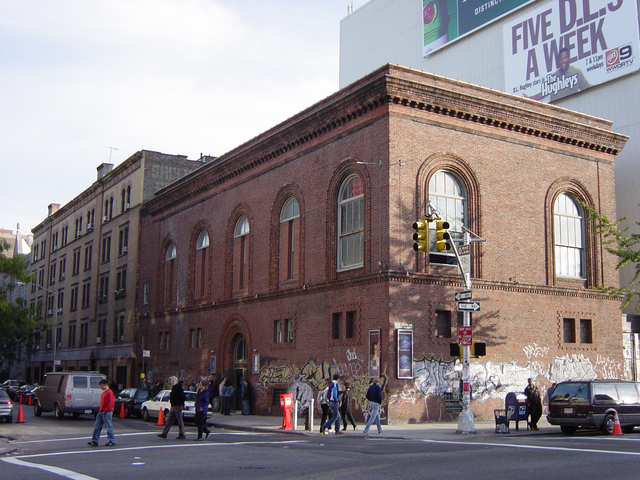 Description from the Anthology website and quarterly program booklet:

Anthology Film Archives evolved from roots and visions that go back to the early Sixties, when Jonas Mekas, the director of the Film-Makers' Cinematheque, a showcase for avant-garde films, dreamed of establishing a permanent home where the growing number of new independent/avant-garde films could be shown on a regular basis.

This dream became a reality in 1969 when Jerome Hill, P. Adams Sitney, Peter Kubelka, Stan Brakhage, and Jonas Mekas drew up plans to create a museum dedicated to the vision of the art of cinema as guided by the avant-garde sensibility. A Film Selection committee – James Broughton, Ken Kelman, Peter Kubelka, Jonas Mekas and P. Adams Sitney – was formed to establish a definitive collection of films (The Essential Cinema Repertory) and form the structure of the new institution.

Anthology Film Archives opened on November 30, 1970 at Joseph Papp’s Public Theater. Jerome Hill was its sponsor. After Jerome Hill’s death, in 1974 it relocated to 80 Wooster Street. Pressed by the need for more adequate space, it acquired in 1979 Manhattan’s Second Avenue Courthouse building. Under the guidance of the architects Raimund Abraham and Kevin Bone, and at a cost of $1,450,000, the building was adapted to house two motion picture theaters, a reference library, a film preservation department, offices, and a gallery.

At the Courthouse, Anthology has found an ideal home as a chamber museum, dedicated to the preservation, study and exhibition of independent and avant-garde film. It is the first museum devoted to film as an art form, committed to the guiding principle that a great film must be seen many times, that the film print must be the best possible, and that the viewing conditions must be optimal.

Anthology opened at its current location on October 12, 1988.

The Anthology entrance is located on 2nd Street, at the corner of Second Avenue. At Second Avenue and 10th Street is the famed 2nd Avenue Deli, an esteemed kosher eatery.

Funny thing I have never seen a film here.

I am not into non-narrative film making so I don’t go here all that often, though I was there Fourth of July weekend to take another look at Herzog’s haunting “Lessons of Darkness” documentary.

I have seen many films here. For a brief time Fabio Canosa, a film programmer who also worked at the Public and Symphony Space among other venues, was affiliated with AFA and I remember going there more often when he was associated with Anthology. I know he wanted Anthology to install a marquee and to get the MTA to leave the subway entrance at Houston & Second Avenue open after 9 p.m.

What is funny is how the neighborhood around AFA is rapidly gentrifying. There is luxury housing literally going up across the street. CBGB, the legendary punk bar, one block east is now surrounded by luxury apartments and trendy restaurants. Amazing how NYC changes.

Given the times, thankfully the AFA owns their building, ensuring they’ll continue to be around…

The 2nd st entrance to AFA appears in Spiderman 2 as the extirior to Doc.Oc’s labrotory.

It’s great inside. It feels old, but it isn’t too bad. I go every year this weekend to see the Bicycle Film Festival my friend started. 5 years later, it’s expanded around the world to 16 cities. It started here. It’s always packed and they have lots of other films year round.

Was there for the 8th annual Bicycle Film Festival and much to my surprise, they have new seats!!! The old ones hurt my butt and back and were too creaky. Went there yesterday and they look are bucket seats – they look like the kind for those seated racing car arcade games but they are comfy and provide great back support. Found out they were all donated!