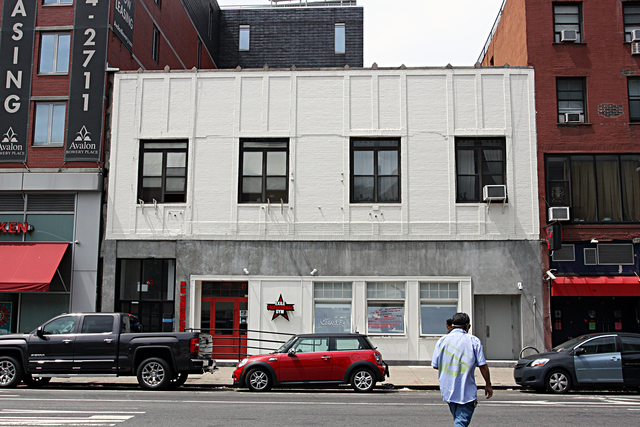 The New Law Theatre was in operation from 1913. By 1926 it was operated by the Meyer & Schneider circuit. It operated through 1930.

I checked my 1921 Bromley’s map once more. The St. Marks theater had the lobby/entrance at 133 Second Avenue (next to the Public Library), but the theater was actually located around the corner at 35-37 St. Marks Place (E 8th Street).

In the 1914-1915 edition of American Motion Picture Directory the Astor Theatre is listed at 133 Second Avenue.

The New Law Theatre and the St. Marks Theatre are both listed under their respective addresses in the 1926 edition of Film Daily Yearbook.

Intriguing. I never came across an Astor theater on 2nd Avenue in my sources (mostly Yiddish press of the 1910s). To whom would they have catered? The 1914-15 year + 600-seat capacity suggest that is was built under the city’s new building code of 1913 (Folk’s Ordinance).

No idea. Doesn’t ring any bells.

I don’t have any records in my documents for a New Singer (or Singer) Theatre operating in Manhattan as a movie theatre.

There is a New Singer Theatre listed in the 1926 edition of Film Daily Yearbook, located at 375 Stone Avenue, Brooklyn (600 seats). It is listed until at least 1930.

Warren: I don’t think so in this particular case. The New Law refers to the new building code for moving pictures. When this bill was passed in July 1913, many 300-seat nickelodeons (mostly storefronts) were demolished and replaced by 600-seat theaters. Usually the adjacent plot was bought to do this because the standard lot size in Manhattan was too small for a 600-seat theater. Some of the newly opened theaters got new names (e.g. Essex Street Theater became the Palace Theater) others kept their old name but the word new was added (e.g. New Delancey Street Theater).

There is a vintage image on this page, dated April 1910 (scroll down just a bit) that shows several theaters at the lower end of 2nd Avenue. On the lower left side of the photo, one can make out the marquee for the Woolworth Theatre, which is listed here as the Majestic Theatre, and just a bit beyond that on the next block one can see the marquee for the New Law – with the word “Photoplays” spelled out.

And still further beyond the New Law, there is another marquee that appears to be advertising “Tickets” and which I believe may belong to the 2nd Avenue Theatre.

My mistake on the vintage image – it is an undated photo, labeled only “early 20th Century.”

The M&S circuit took over this house in 1922, according to this item from the March 18 issue of Real Estate Record and Builders Guide:

“Leases a New East Side Theatre

“The newly organized New Law Theatre Corporation, having for directors B. and C. Mayer and L. Schneider, leased for a term of 10 years the 2-sty theatre building, 40.0x70, at 23-27 Second av. M. D. Bohrar, attorney, represents the new company.”The January 14 issue of the same publication had noted that, on January 4, the M&S circuit had bought the theater at 13-17 Second Avenue (the Woolworth Theatre, later called the Majestic.)