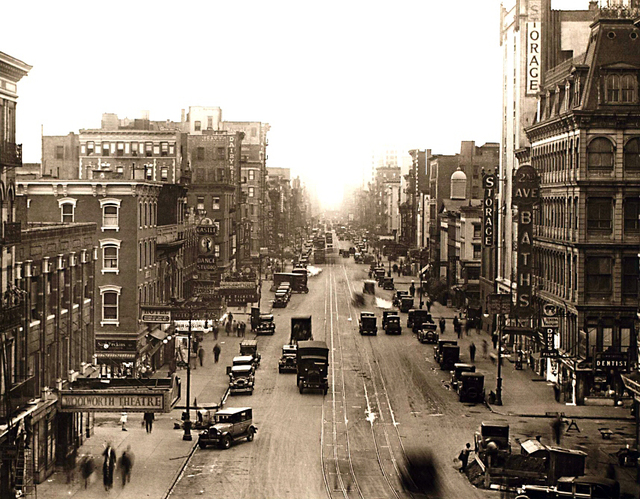 Originally opened as the Woolworth Theatre. It was renamed Majestic Theatre in 1922 when it was taken over by the M. & S. circuit. It exhibited motion pictures at this location through 1928.

The Majestic Theater opened in 1914. It was developed by Louis Minsky (the father of the Minsky brothers) and William Rosenberg. Like the New Law Theater at 23-27 Second Avenue (also developed by Rosenberg), it was operated by the M & S chain of Mayer and Schneider. Both movie theaters were designed by Louis Sheinart and located near David Kessler’s Second Avenue Theater, a large ‘legitimate’ Yiddish playhouse which opened in 1911. In the early 1910s, Second Avenue was emerging as the new Yiddish Theater district.

I just discovered this lovely site. Louis Sheinart, the architect of the Majestic and the New Law Theater, was my great, great (great?) uncle. He also designed the Variety Theater. There are some terrific photographs here. My family knows very little about him, but it is wonderful that his memory is being kept alive through Cinema Treasures. If anyone has more information about Louis Sheinart, it would be greatly appreciated. Thank you. esheinart

Louis Sheinart also designed the American Movies Theater for Charles Steiner. It seems that he closely collaborated with both Steiner and real estate developer Louis Minsky during the mid 1910s. It may well be that he designed the National Theater on East Houston street, a large 2000-seat Yiddish legitimate playhouse that opened in September 1912 The opening was covered by the New York Times (9/25) but the name of the architect is not mentioned.

Are their any records or photographs in your family?

Louis A. Sheinart was my grandfather and I would love to talk to any family members. We do have photos of him.

The Majestic Theatre has been demolished. The building, which was on the southwest corner of Second Avenue and First Street, is to be replaced within two years by a twelve-story apartment building. This photo, taken in December, 2011, by Scott Lynch, shows a bulldozer bringing rubble from inside the building to Second Avenue.

This post from the Greenwich Village Society for Historic Preservation’s Off the Grid blog has some information about the building, and a photo from April, 2011. It says that the house was called the Woolworth Theatre when it first opened, and that by 1930 the theater was gone.

An item in the lower left corner of this page of the January 14, 1922, issue of Real Estate Record and Builders' Guide concerns the sale of the theater to the M&S circuit. That’s most likely when the theater’s name was changed to Majestic.

In its last decades, the building was the site of the Mars Bar, a famous East Village drinking establishment, the impending demise of which occasioned a plethora of posts to the Internet. I’ve read a number of these, and have yet to find one that mentions the theater the building once housed. It’s likely that nobody in the neighborhood now, bohemian or yuppie, remembers a theater that closed over eighty years ago.

I don’t know if the Mars Bar occupied any part of the building which had been part of the theater, or if it was confined to the storefronts along the First Street side. If it did extend into the theater’s space, the space must have been so changed that its former purpose was unrecognizable… or maybe the denizens of the bar were simply too drunk to see what it had been.

Joe, that photo on ‘Off the Grid’ also appears to show the New Law (just north of the Woolworth as Photoplays)and the Public (On the right side of the street on 4th, the future home of CBGB’s).

Hey Al… What about the marquee just beyond the Photoplays? Seems to be advertising something about “Tickets” and “On Sale?” The location would seem to suggest that it might be the 2nd Avenue Theatre at 35-37 2nd Avenue.

That photo of Second Avenue at Off the Grid must have been taken from one of the upper floors of the National Theatre building on Houston Street at Chrystie.

I guess I mapped the 2nd Avenue on the east side of the street for some reason but that well be that theatre. It says BENEFIT TICKETS on the banner above.