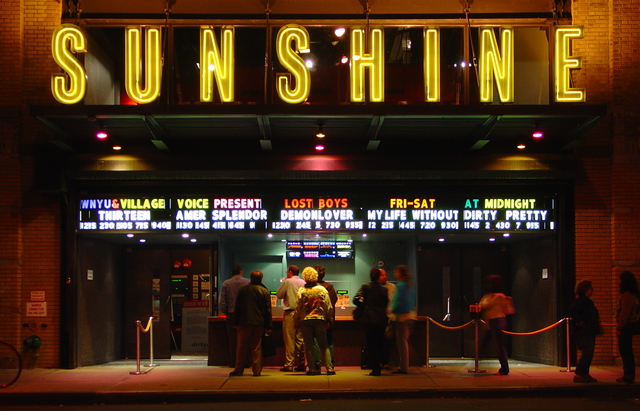 The entertainment beginnings on this Lower East Side site began in 1909 when the Houston Hippodrome opened as a venue for Yiddish vaudeville acts and films.

It was demolished around 1916 and on May 15, 1917 the 600-seat Sunshine Theatre opened on the site. It was operated by Chas Steiner & Jack Schwartz. In the late-1930’s it was renamed Chopin Theatre. The theatre closed in 1945 and had been used as a storage warehouse into the mid-1990’s.

Following a three-year, $12 million renovation project, the Sunshine Cinema reopened on December 21, 2001 and was set to do battle with the famed Angelika and Film Forum theatres which, up until recent years had been the favorite destinations of the art house set.

The Sunshine Cinema certainly filled a need in the area as there are few movie theatres in or around the Lower East Side. The facade was restored and 3 of the 5 auditoriums contain stadium seating, while all have plush seats and the latest sound and projection equipment.

The theatre was the first for Landmark Theatres in the much coveted New York indie market. The building was sold in May 2017 and Landmark decided not to renew their lease. The popular Sunshine Theatre closed January 21, 2018 and was demolished in July 2019.

Is it gonna be demolished?

Unfortunately, it appears that demolition is now underway.

I just had to gank and add that “Sunshine Sunset” graffiti shot from that article to the gallery.

does the demolition of this theater effect the
kinish bakery next door?

I saw The Little Hours in the last year the theater was still existing with a friend. Never realized how tiny it was. Have they demolished it yet? Such a shame about this theater. It was absolutely lovely when I went.