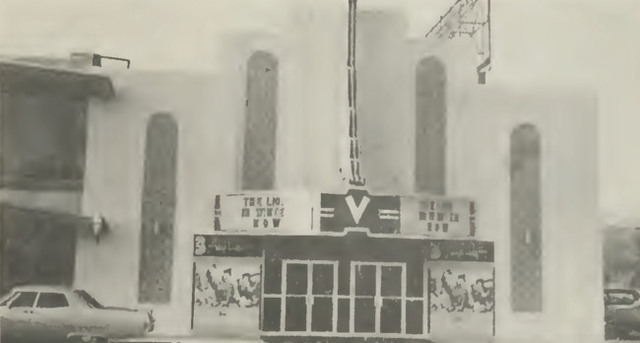 Sincerely I apologize for any incorrect information provided by my-self; Indepth research has revealed that VILLA Theater architects were NOT Jay McKay nor Pat McGee. Jay McKay was interior decorator for the Plaza Theater. Pat McGee was a Paramount Theatres General Manager, also involved with the Plaza. But neither man helped design the Villa.
Please remove my Aug 7, 2005. comments.

Architect for the VILLA Theater was officially B. GAYLORD NOFTSGER, as reported in several 1937/38 news articles concerning the Villa Building in the Daily Oklahoman Newspaper. My notes have been recovered.

B. Gaylord Noftsger was a talented architect who knew how to produce impressive results on a limited budget. For OKC’s VILLA Theater the architect skilfully diguised an “economy” auditorium with decorative drapery interlaced with strands of shimmering beads, and careful placement of a few colorful, lighted niches here and there, while keeping the remainder of the space in dramatic shadow. Noftsger cleverly enhanced a drab ceiling by installing soft lighting effects behind three massive “bullseye” HVAC grills. All this put together created a striking illusion that the entire auditorium was ornately decorated, when in acutality it was not.
The VILLA was very popular with teenagers because it was located midway between two large high schools, and near a junior high. The balcony was a favorite “make out” spot for teens who did'nt have cars.

Look into oklahoman archive web site for pictures of the Villa Theatre.
Noftsger’s architectural drawing can be found on July 10, 1938, and an exterior photograph in the September 24, 1939 issue.

If you would like to see the original look of the Villa Theatre, then see 1937 photos of the Tower Theater, Duncan, OK. These were sister houses, and the only differance between the two was that the Villa had a balcony and the Tower didn’t. To view images type in word “tower”.
View link

Seymour, the Tower Theater that was sister to the Villa was located in Drumright, not Duncan.

You’re right, Melba, and Tower Theatre shots mentioned on Seymour’s post are those of the Drumright Tower.

I saw THE GUMBALL RALLY here in ‘76, and a second-run screening of WILLY WONKA & CHOC FACTORY. I seem to remember sitting in the balcony. Anyone else remember a balcony?

This opened on September 24th, 1939. Grand opening ad in the photo section.